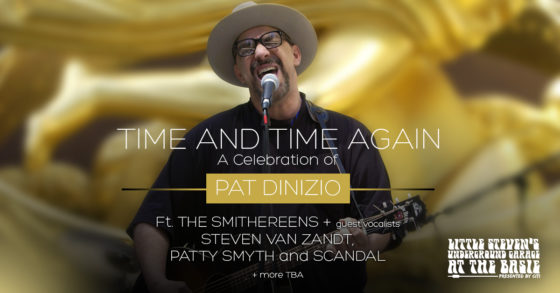 Due to overwhelming demand, there will be a live stream of the sold out Smithereens concert “Time and Time Again: A Celebration of Pat DiNizio” taking place the Count Basie Theatre, Red Bank, NJ on January 13, 2018. The Smithereens will be joined by Rock & Roll Hall Of Famer Steven Van Zandt and other guest vocalists. Also on the bill is Patty Smyth and Scandal.

TIME AND TIME AGAIN: A CELEBRATION OF PAT DiNIZIO

Pat DiNizio, frontman for the New Jersey rock group the Smithereens, died on December 12th at the age of 62.

To many, DiNizio wasn’t just a consummate performer, singer, songwriter and front man of The Smithereens — he was a son, a father, a bandmate and a friend.

In that vein, the show will go on.

“I was set to host this Smithereens and Patti Smyth and Scandal show as part of Citi’s Underground Garage at the Basie series,” Van Zandt said. “With the sudden, tragic passing of Pat DiNizio, I think it’s appropriate that we take this moment to pay tribute to him. I will be honored to sing a few of his songs with the band, and I’m asking any friends of mine if they can make themselves available for a song or two. We’ll see who’s around and announce them shortly.”

A portion of ticket sales will go towards the establishment of the PAT DiNIZIO MUSICAL PERFORMANCE SCHOLARSHIP at the Basie’s Performing Arts Academy. The Basie Academy is home to rock, vocal, jazz and classical music programs.