The Decemberists “Severed” New Song/Album ‘I’ll Be Your Girl’ 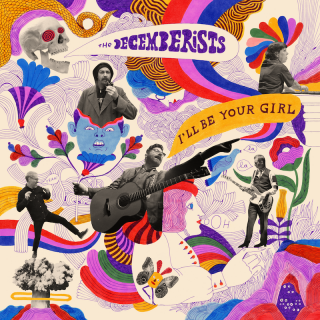 “Severed,” a new song from The Decemberists, can be heard below.  The track is taken from the group’s forthcoming album, I’ll Be Your Girl, available worldwide March 16th.

In a statement, the group said: “We recorded the eleven-ish songs during the early fall in Portland, Oregon, with noted producer and ailurophile John Congleton. You perhaps may be familiar with some of the work he’s done with such bands as St. Vincent, Lana del Rey, Wye Oak, Angel Olsen, Swans — oh, everybody, really. He’s a bit of a goer, production-wise. The songs tend to the darker, more absurdist side of things — I mean, how can you blame us — and features a lot of nice vintage synth work by Jenny and Chris, some heavy drumming from Mr. Moen and, of course, the sort of baroque bass work you’ve come to expect from the former Mr. Lincoln High, Nate Query. All in all, everyone acquitted themselves quite nicely. This is the album art, which was done by illustratrix extraordinaire Carson Ellis. She was nominated for a Grammy last year, you know, for her work on the deluxe package of our last record.”

Previous: Chrissie Hynde, “Wow! I saw Carleen Anderson perform at the Barbican in London Saturday night”
Next: Belle and Sebastian Tour 2018, Tickets + ‘How to Solve our Human Problems, Part 2’