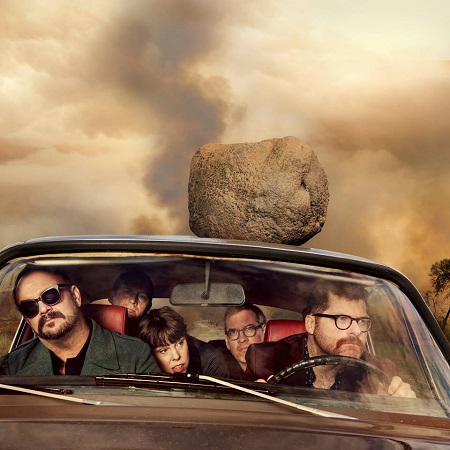 Due to Colin Meloy’s continued vocal strain, The Decemberists have been forced to cancel or reschedule the next five shows of their current tour.  Tomorrow’s show in Red Bank, NJ and the band’s appearance at Mountain Jam this Saturday, June 16th have both been cancelled.  Wednesday night’s show at Celebrate Brooklyn has been rescheduled for Tuesday, August 14th.  Friday’s show at MASS MoCA in North Adams, MA has been rescheduled for Thursday, October 4th.  For the Red Bank show, all refunds for online purchases will be issued automatically.   Otherwise refunds for that show can be obtained at point of purchase.  For the Brooklyn and North Adams shows, all tickets will be honored for the rescheduled dates.  For ticket holders that cannot attend the rescheduled Brookly or North Adams shows, refunds will be available at point of purchase.

In a statement posted via social media, Meloy said:

“I have a heavy, heavy heart writing this. Because of my voice loss, we’ve been forced to cancel or reschedule the next five shows of this tour. I’m so, so sorry to those of you who were attending concerts we were unable to reschedule. I know how much it sucks to have a show cancel on you. I don’t know what to say other than: we’ll return to your area in the future, and we’ll put on a great show.

“What’s been happening over the last nearly two weeks is the stuff of a singer’s nightmare. I don’t know what started it or what particular events conspired to create this perfect storm of voice strain — at the beginning of this tour leg I was feeling healthy and excited about the upcoming shows. Allergies? Altitude? Midwestern dryness? Whatever it was, it created a situation in my larynx that could not withstand the rigors of our particular tour schedule. My voice started leaving me in Toronto and I just never got enough rest on the days off to bounce back; it would get a little better after a few days rest, only to buckle again after a couple shows.

“I love singing. As a shy kid, discovering my singing voice was like breaking free of a clay that surrounded me. I cannot describe to you the sort of despondency I feel when I lose it. Not only is it robbed from me, but it’s robbed from this band. It makes everything jutter to a stop. I tried to just put my head down and do the shows, but I was beginning to feel more and more that we were shortchanging you, the fans, the audience. We were doing shorter sets, we were dropping songs that had me singing at too high of a range for too long. Then when my voice started failing, we just kept going. But we were doing everyone who came to shows a disservice. We were not meeting the standards of what I like to think is a pretty high bar for a Decemberists show.

“The good news? While the first ENT thought he saw nodules on my vocal folds, I’m happy to report that that diagnosis was overturned by the three subsequent scopers. The consensus was fatigue, strain and irritation of the vocal folds. Nothing that can’t be healed with vocal exercise. I just need rest.

“This is also a great wake up call for me. Clearly gone are the days where I can just leap on stage, bottle of wine in hand, and start belting out high Ds & Es for two hours straight after the most desultory of warm-ups. I have been working with professionals to develop a new tour regimen that will help my voice withstand the rigors of tour. Warm-ups and diet, being conscientiousness about my voice use between shows — all part of a constellation of things I can do.”

Previous: Perry Farrell Talks About Encounter With An Entity Who Took Her Own Life, Says She Is “In A Place Of Suspension”
Next: Smashing Pumpkins on Howard Stern 2018