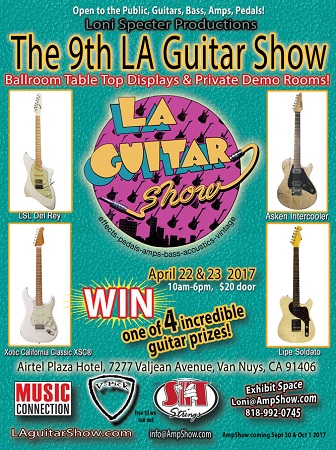 The 9th LA GUITAR SHOW is a music equipment expo, open to the public.

What to expect
Attendees can plug into the latest gear and play all day. Several prize giveaways on both days. Guitar giveaways from LsL Instruments, Xotic Guitars, Asken Guitars and Lipe Guitars, plus free V-Picks and Stay In Tune Strings. Visit www.laguitarshow.com for more info.

LA Guitar Show In 1983 in Los Angeles, The LA Guitar Show established the formula for all consumer music expos that followed. It brought together for the first time vintage, custom, large and small manufacturers of guitars, amps and other music related products and educators. The show’s creator and producer, Loni Specter, oversaw all aspects of the show including venue selection, exhibitor sales and relations, advertising and PR as well as booking and scheduling all live performances and personal appearances.

Another special event staged by Specter, garnering national media coverage in 1988 was the “First Ever Rock Seance” which was held under the stars in the courtyard of Ren-Mar Studios Hollywood, the location for that year’s guitar show. The Los Angeles Times listed the event as one of the 10 most unusual happenings for that year and was covered by FOX TV and local TV as well as being featured in Business Week magazine.