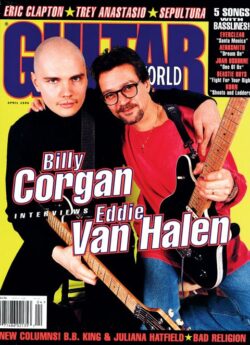 Guitar World reposted one of their old school articles where Eddie Van Halen was interview by Smashing Pumpkins frontman Billy Corgan. Originally published in their April 1996 issue, the interview later had Corgan describing the conversation as a religious experience. Some highlights from the interview can be found below.

Make sure to read the entire Guitar World feature @ this location.

Eddie Van Halen: “I was starting to get more involved.”

Van Halen: “Especially on Fair Warning. But what I had to do to get involved was very strange. We’d work during the day, and I wasn’t very happy with the way things were going or the way people were approaching the whole recording process.

“I would sneak back into the studio at 4 a.m. with Don Landee, the engineer, and completely re-record all the solos and overdubs the way I wanted them. The fucked-up thing was, no one even noticed. That’s how uninvolved they were on a musical level.”

Corgan: “Fair Warning is a really mean, dark album. That was unusual for you guys. Up until that time you were more of a party band.”

Van Halen: “It was kind of a dark period in my life. I was getting married, which flipped Roth out to the bone. I actually overheard him say, ‘That fucking little prick, not only is he winning all the guitar awards, but he’s also the first to marry a movie star.’ So that’s what I was up against. A guy that wanted everything that was going my way.

Corgan: “Let’s talk about some of the specifics of Fair Warning. What can you tell me about Push Comes to Shove?”

Van Halen: “That was Roth’s idea of trying to cash in on the reggae thing. I said, ‘Okay, if you want that kind of beat, I’ll see what I can do.’

Corgan: “That song has an incredible guitar solo!”

Van Halen: “I’ll never forget that one. We were sitting in the studio with our producer, Ted Templeman, and I knew exactly what I wanted to do. I must have played that solo over 20 times, and Ted kept saying, ‘No, it’s not good enough.’ So I said, ‘Okay, but I don’t understand what you want.’ So we just called it a day.

“Later that night I came back and played the same solo that I played 20 times that day and left it. The next day he heard it and said, ‘That’s great.’ On the whole album I was angry, frustrated and loose.

Corgan: “On your debut album, Van Halen [1978], your guitar solo, Eruption, was the second track. Wasn’t it kind of a bold move to place this crazy guitar instrumental so close to the beginning of the record? Was it a conscious move?”

Van Halen: “The whole story behind Eruption is unusual. It wasn’t even supposed to be on the album. I showed up at the recording studio early one day and started to warm up because I had a gig on the weekend and I wanted to practice my solo guitar spot.

“Our producer, Ted Templeman, happened to walk by and he asked, ‘What’s that? Let’s put it on tape!’ So I took one pass at it, and they put it on the record. I didn’t even play it right. There’s a mistake at the top end of it.

“To this day, whenever I hear it I always think, ‘Man, I could’ve played it better.'”

Corgan: “But what was the idea behind making it the second track? It certainly gave it more weight than if you had sequenced it at the end of the album.”

Van Halen: “I think they put it there because it was different, but I’m not really sure. At that point in my career, I really didn’t have any control over anything. I was just like, ‘Yes, sir. Whatever.’ We barely had any input in the early days of the band.

“I mean, there are so many things wrong with those early records – the drums sound like shit on the first album and the bass is barely audible. We just played live, they recorded it, and it got put out.”

Corgan: “Van Halen II [1979] is a really good record, but it sounds to me like you really didn’t have the time to fully explore all your guitar and song ideas.”

Van Halen: “It was very hurried. We had just toured for a year, and we only had two weeks to write and record. But I’ll never forget the questions we got after the second record was released: ‘Why does this record sound different from the first album?’ Because it’s not the first album!

Corgan: “But you agree that it wasn’t completely realized?”

Van Halen: “Yeah, but I don’t think it was because of us. There was a lot of cocaine on the console – and it wasn’t necessarily the band’s. That was a problem. And we weren’t allowed any input on the mix. But ultimately we were just plain rushed. That’s why you hear that little riff fade out at the end of the album – Al and I didn’t want to stop. [laughs] We weren’t done, but we had a deadline.”

There’s a lot more to the interview, so make sure to read the entire Guitar World feature @ this location.