Ten Years After: Ric Lee Talks to Billboard About Woodstock, US Dates – 2019 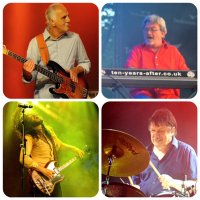 Ten Years After (Official): “Ric Lee talks to Billboard magazine about playing Woodstock Festival and coming back to The States 50 years later to be part of the anniversary celebrations with his original band mate Chick Churchill and newer members Colin Hodgkinson & Marcus Bonfanti”

RIc Lee talks to Billboard magazine about playing Woodstock Festival and coming back to The States 50 years later to be part of the anniversary celebrations with his original band mate Chick Churchill and newer members Colin Hodgkinson & Marcus Bonfantihttps://t.co/pw77LJ6Nyc

Drummer Ric Lee, who remains from the original lineup along with keyboardist Chick Churchill, remembers Woodstock fondly in his new memoir, From Headstocks to Woodstock. And as the group prepares to go back to the garden — with a planned U.S. release for its 2018 album, A Sting In the Tale, later this fall — Lee spoke with Billboard about memories of mud, music and getting in and out of Woodstock alive.

If I remember right we didn’t actually know about (Woodstock) until we were on tour at the time. We were doing the Newport Festival (package) on the road and we were with Nina Simone in St. Louie the night before (Woodstock). All along our manager had been saying to Frank Barsalona, our agent, “No, the money’s not good enough. We’re not gonna do it.” And then, as momentum built up through the press and TV and all the people coming from around the world Barsalona finally phoned him and said, “Look, I think you’re crazy if you don’t sign and do this. Janis has just signed. Jimi Hendrix is signed. The Doors are doing it, the Airplane, the Who,” whoever else. He said, “You’d be crazy not to do it.”

And at that time they were talking about it maybe being 50,000 people, which was no bigger than we’d done at the Seattle Pop Festival earlier in the year, so Woodstock didn’t seem that big at the time — but of course, as you well know, it grew to monstrous proportions. It was in the papers every day by then. It was on television. There were people stirring up stories about how there was going to be a riot, it’s gonna be a mess — this, that and the other. We started to get an idea of the momentum of the thing.

The first time we really got a sense of the enormity was when we flew in by helicopter, ’cause you couldn’t get within six miles of the place since everybody had just dumped their cars on the side of the road and you couldn’t get through. We’d left St. Louis at six that morning and had not really had that much sleep. We arrived at a Holiday Inn, which was like Tranquility Base, and all the rooms were taken so we ended up sharing with Big Brother & the Holding Company and there was nowhere to sort of lie down and get a decent kip. And the next thing was Dee Anthony, who was acting as our American manager at the time, said, “Come on, you’ve got to get to the festival. They want you. You’re supposed to be on in an hour’s time.” So we went to get in the limousines that brought us from New York and he said, “Nah, you can’t get in by road. You’ve got to go in by helicopter.”