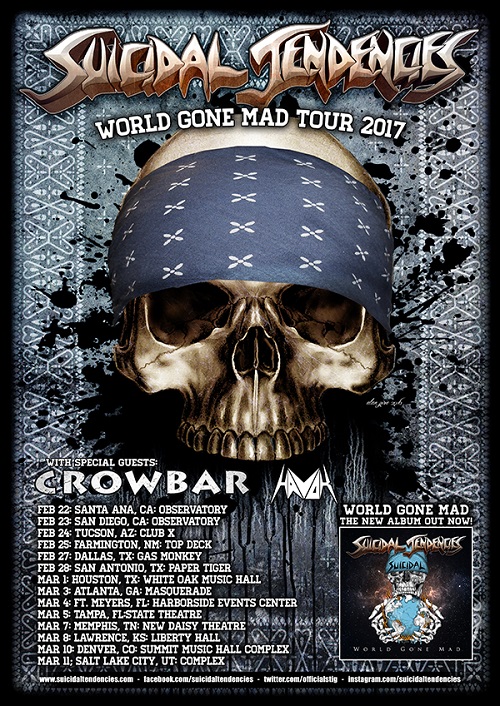 Suicidal Tendencies launched their tour last night, with the great Dave Lombardo behind the drumkit.  Havok & Crowbar are opening.  Make sure to check out Havok, their new album drops on March 1oth.

“First show is tonight in Santa Ana. The band is really excited to start the next run of dates. Unfortunately we were just informed that the New Mexico show is being cancelled as the promoter has been in the hospital with a stroke and they found 9 blood clots. The band has worked with him for years and hopefully he will make a full recovery in time, but their is no time line as of now. Unfortunately with such short time, they were unable to make other arrangements.
Our thoughts and prayers are with Alan and wish him a speedy recovery.
All other shows are on as planned.
Here’s tonight’s show info.
Where: Santa Ana, CA
Venue: The Observatory
Doors open at 7 pm
Havok : 8PM
Crowbar : 8:45
Suicidal Tendencies : 9:50 PM
Can’t wait to get the tour off to another great start in So. Cal.
Let’s get Cyco!”

The video and update below was posted by Havok:

“Last night was our first show with Suicidal Tendencies and Crowbar in Santa Ana, CA. It was sold out. This video is last night in a nutshell. San Diego tonight”

Previous: Video: Six Feet Under Performs New Track from Torment, Out 2/24/17, Listen!
Next: Mike Muir on Dave Lombardo, “he gives them everything he’s got”