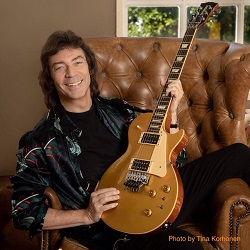 Check out this interview here… https://t.co/MLyGlcZEtG

EXCERPTS FROM THE INTERVIEW

Rolling Stone:  Tell me how the idea came about to do Selling England by the Pound straight through on tour.

Steve Hackett:  In recent years, I’ve been doing 50 percent solo stuff and 50 percent Genesis stuff when I tour. I figured those are well-known songs and I’m entitled to do that. A lot of it rates high in the affection of fans and I’m happy to do that. I’ve always cherry-picked what I thought was the best of all the eras, but if I had to look at a favorite album I’d say it was Selling England by the Pound.

Funny enough, in 1973 when we did that album, we could barely get a gig anywhere in the States. We were a young and struggling band at that time and John Lennon gave an interview and said Genesis was one of the bands he was listening to. I was particularly proud of that album which coincided with that. It still didn’t mean we could get gigs anywhere, but that’s how it was in those days. The information revolution had yet to happen. You were on one coast or another and the other coast was another planet.

It was a tricky time, but it gave us hope that if he liked it that others might follow. It was high in my affections. I think it’s the best Genesis album, at least the best one we did with Peter Gabriel as lead singer. Phil was starting to develop as a singer on his own. He did one of the tracks on his own, “More Fool Me.” He was lead singer on that and did his own harmonies on it.

We do authentic versions of these songs, plus we include an extra track that was supposed to go on the album but didn’t happen. It was a track written by Peter Gabriel and me called “Deja Vu.” I include that like a sort of director’s-cut/deleted-scene idea. We’ve been playing that live and it’s going down very, very well with audiences. There’s something particularly stirring about the melody that we originally came up with on that. I’m proud of all that, so that’s the Selling England side of the story.

Tell me what you remember about creating the “Firth of Fifth” guitar solo, which is one of your great moments in Genesis.

Steve:  Tony wrote the song and originally that was going to be played on piano, and certainly it worked like that. Pete doubled it on flute originally and I thought, “Well, there’s an acoustic moment.” But then I started playing it on electric guitar. I just got the equipment I’d use for the next few years. There was the Echoplex, so suddenly I’m working with an echo unit. And it happened to work particularly well with the pedal I had and the fuzzbox I had back in the day. Fortunately, most of the time it would feed back on a high F sharp when I hit that, so it sounded as if the notes went on forever. And it was a particularly good melody played on guitar. Played on piano, it sounds like a French Impressionistic thing. But when played on guitar, it’s got something Egyptian or Middle Eastern. Once I started playing it on guitar, Tony was like, “Oh, let’s do it as a band. Let’s do it with big keyboards.”

The song “I Know What I Like” was the poppiest thing Genesis had done up to that point. Were you trying to make a hit or did it just come out that way?

Steve:  I had this guitar riff that I used to play with Phil. I remember Mike [Rutherford] said, “It sounds too much like the Beatles and George Harrison.” However, we persisted with it from 1972 to 1973 and the band jammed along and came up with some lyrics. It ended up being a very short version of the song. The version we used to do live was something like six minutes long. I was very pleased it came out the way it did. It became a singalong chorus and our first hit. But I don’t think the album was full of would-be hit singles. It was still an album. I think we didn’t compromise anything to produce the album. It just so happened there was this little ditty on it called “I Know What I Like.”