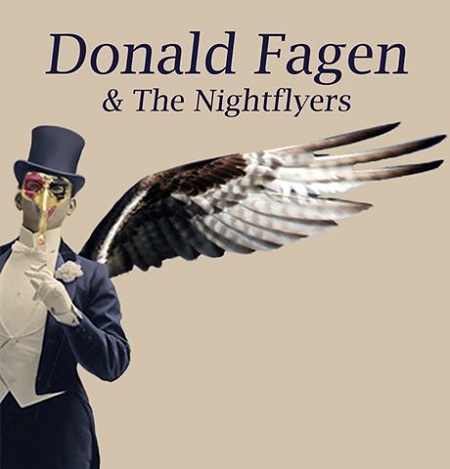 Steely Dan frontman Donald Fagen has a new project taking to the road this summer: Donald Fagen and The Nightflyers. Set to begin on August 3rd and 4th at the Capitol Theatre in Port Chester, NY, the U.S. tour leg will hit two dozen cities before wrapping at San Francisco’s The Masonic on Sept. 16. Following the U.S. dates, the band will travel to Japan for select performances. On tour, Donald Fagen and The Nightflyers will play songs from Fagen’s celebrated solo albums, Steely Dan hits, plus, as promised by Fagen, “some swell surprises.”

Joining Fagen (keyboard, vocals) is an all new band –the Nightflyers- a quartet of young musicians that Donald has been working with over the past few years near his home in Woodstock, NY. The Nightflyers are Connor Kennedy (guitar, vocals), Lee Falco (drums, vocals), Brandon Morrison (bass, vocals) and Will Bryant (keyboards, vocals). Previously, the foursome have been performing together in haunts, joints, dives, and even a few reputable establishments, up and down New York’s Hudson River Valley and beyond.

While Steely Dan have remained an active touring band, they haven’t released a studio album since 2003’s Everything Must Go.