Sammy Hagar on First Van Halen Rehearsal, “They’d been up all night waiting for me” + Ronnie Montrose 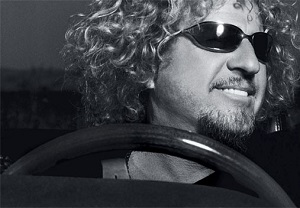 Classic Rock recently interviewed Sammy Hagar. An excerpt from the interview can be found below.

What did you make of Ronnie (Montrose) the first time you met him?

Sammy Hagar:  I thought he was the coolest guy on the frickin’ planet. And he was. I saw the last show he played with the Edgar Winter Band at Winterland in San Francisco. This was after those other guys told me they didn’t want to play the songs I’d written. I said: “That’s the kind of guitar player I want to have.” I got his number, and drove five miles in my battered truck and knocked on his door.

The first songs you wrote were Make It Last and Bad Motor Scooter, and the first album you made was Montrose’s debut. That’s a hell of a start.

Sammy:  Man, I know! When I look back, I think it was a miracle. I had an astrologer do my chart just before, and he goes: “Something happened to set you on your path, and it’ll carry on for eighty-one years.” I was twenty-four, twenty-five then, so I guess I’ll carry on doing this until I’m a hundred and five.

What was your relationship with Ronnie like? Did you actually get on with him? I tried.

Sammy:  I tried so hard to bring him close, but he was a distant person. He had four or five marriages, he changed band members the second he started getting the tiniest bit of success… It’s like he was afraid of getting close, even when he was hurting. The second you got serious he’d start talking about sex or something to throw it off. He would never let you find out who he really was.

So when he committed suicide it was the horriblest thing. I couldn’t believe it. But at the same time, we knew it was just a matter of time. He would not let anyone help him. He would not.

You left Montrose in 1975. What happened?

Sammy:  We were in Paris, headlining two nights at the Olympic Auditorium. We were in a station wagon – Ronnie sitting shotgun, me sitting behind him. I was sick as a dog – the flu or food poisoning or something. He turned round and said: “I’m quitting the band after this show.” We parked the car in the back of the venue, and he said: “What are you gonna do?” I said: “You motherfucker. What do you think I’m gonna do? I’m gonna start a new band, that’s what.”

Karma’s such a weird thing, because something got me out of that band and it’s the best thing that ever happened. It must have hurt, though. I was devastated, man. I came home, my phone was shut off, I was back two months rent on the house I was living in, I had a wife and child. I immediately went on unemployment and welfare, and I started calling friends saying: “I’m starting a band.”

I reached out to the people around me who were just as desperate as me. I couldn’t afford to hire anyone, I just asked them if they wanted to start a band. It was tough, but I was never, ever helpless and crying. I was fucking getting up in the morning and going to work. Man, no one’s ever gonna outwork me, I can tell you that.

In 1985 you joined Van Halen. Day one in the rehearsal room with those guys – what was it like?

Sammy:  Oh, I can tell you exactly what it was like. At that stage I had a good career going, I was wealthy, I was eating in the finest restaurants and wearing the finest fucking clothes, I was driving Ferraris. I was becoming a little too sophisticated – it was killing my music. Whereas those guys were living a completely different lifestyle.

Long story short, I walked in that room and these guys had cigarette butts and empty beer cans and whiskey bottles everywhere, multi-thousand-dollar guitars lying upside-down on the ground. And it stunk like shit because of the smoke. Eddie comes walking out with a pair of sunglasses, jeans with holes in them, just outta bed, cracking a beer and smoking a cigarette. Alex was still drunk. Mike hadn’t even been home.

They’d been up all night waiting for me. I’m looking at these guys, then I’m looking at myself in a suit, and I go: “I look like a fucking idiot. This is a real rock’n’roll band.”

You were in Van Halen for ten years first time around. During that period did the good outweigh the bad?

Sammy:  Of course. The good was a million times better than the bad. The bad was such a short, one-year thing that when it went bad, it was just, like, [baffled]: “What just happened?” What did happen? Well, our manager, Ed Leffler, God rest his soul, died. And the music started suffering because we were arguing.

It was like: “Fuck, this is way too hard.” I told my wife: “I want out of this band, but I can’t quit because I love it too much, it’s too important.” And I hung on until they threw me out.

At the age of 71, tequila multimillionaire @sammyhagar can look back on an extraordinarily successful life in music – Montrose, Van Halen, Chickenfoot, The Circle and morehttps://t.co/waQYyQrZaY