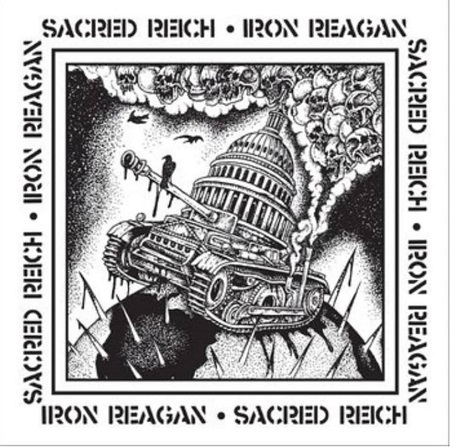 A first new song called “Don’t Do It Donnie” will be released April 19th on a split-7″ with IRON REAGAN. Comments Phil Rind: “We are stoked to do a split with Iron Reagan. When we began as a band in 1986 we were influenced lyrically by punk bands and the Reagan era. This is a great way to get back to our roots. The song is a heavy and cheeky middle finger to the politics of today. You’d think we’d have learned by now. There is a reason our first record is called Ignorance.“

IRON REAGAN are participating with the exclusive song “They Scream.” There will be 1.000 black copies available of the 7″ and nothing else. Pre-order from EMP.

The new SACRED REICH album Awakening was recorded with producer Arthur Rizk and engineer John Aquilino at The Platinum Underground in Arizona.

PRE-ORDER IS EUROPE/UK ONLY.
US RELEASE IS APRIL 19th.