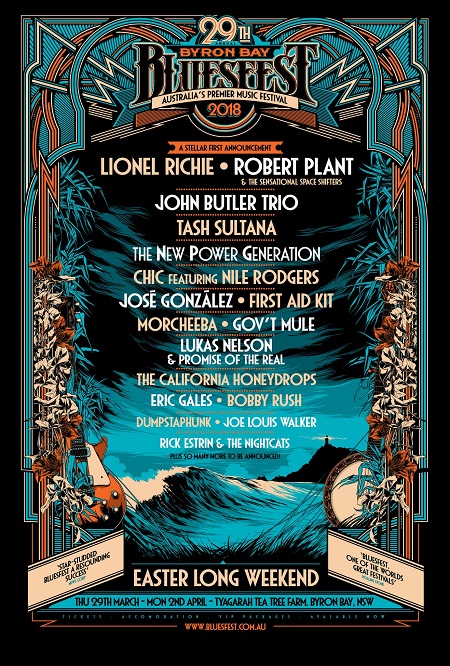 Robert Plant, along with his band The Sensational Space Shifters, will headline Bluesfest 2018, Australia’s contemporary blues & roots music festival. The full lineup has been posted below.

Plant’s self-produced eleventh solo album, Carry Fire, will be available October 13th via Nonesuch/Warner Brothers Records.  Listen to the single, “Bones of the Saints,” at this location.

About Bluesfest:
Bluesfest showcases music from around the world annually on the Easter long weekend on 120 hectares at Tyagarah Tea Tree Farm, just north of Byron Bay, NSW.

Bluesfest presents over 200 performances with up to 7 stages over 5, 12 hour days, as well as camping for up to 6,000 people, 5 licensed bars, over 100 food and market stalls, undercover food courts, beer gardens, and children’s entertainment.

From a modest crowd of 6,000 when it began in 1990, Bluesfest now attracts an audience of over 100,000.
It is regarded as the foremost destination festival in Australia & renowned for being a safe, fun, family-friendly event.

LUKAS NELSON & PROMISE OF THE REAL