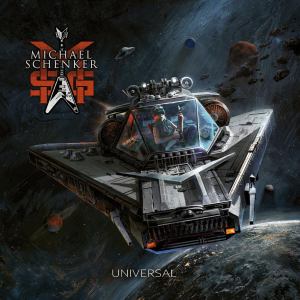 This latest offering will feature all the strengths of this exceptional musician: first-rate songs with anthemic melodies, catchy guitar riffs, and inspiring solos. As we have come to expect from him, SCHENKER has once again enlisted a number of prestigious fellow musicians for the recording of his new studio production, among them, as main vocalist, Ronnie Romero (Rainbow, Vandenberg), who will also be MSG’s frontman on their upcoming tour, Michael Kiske (Helloween), and Ralf Scheepers (Primal Fear), keyboard player Steve Mann (Lionheart), drummers Simon Phillips (Toto, The Who), Brian Tichy (Whitesnake, Foreigner), Bobby Rondinelli (Rainbow), and Bodo Schopf (Eloy), as well as legendary bassists Bob Daisley (Black Sabbath), Barry Sparks (Yngwie Malmsteen, Dokken), and Barend Courbois (Blind Guardian, Zakk Wylde), with Tony Carey as a very special guest.

Like its predecessor Immortal (2021) and the Michael Schenker Fest albums Resurrection (2018) and Revelation (2019), Universal was produced by Michael Schenker and Michael Voss (Lessmann/Voss, Mad Max) at Voss’s Kidroom Studio. The spectacular MSG album cover designed by Zsofia Dankova (Powerwolf, among others) features SCHENKER in a futuristic spaceship, floating high up in orbit. The artwork is based on the guitarist’s own visions, “I had the original idea for the album cover a few years ago, but only now does it seem to fit perfectly. So, I sent some older sketches to my label Atomic Fire Records, and based on this the final artwork and album title were created.”