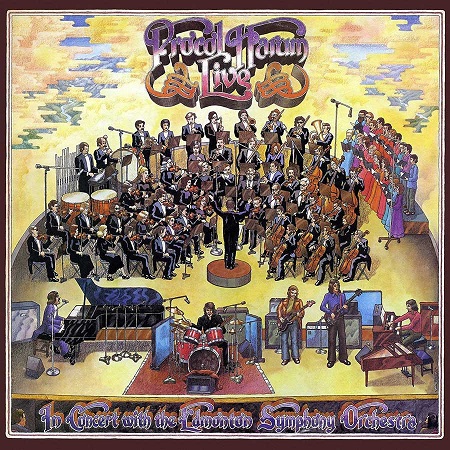 Procol Harum will reissue a remastered & expanded edition of the classic 1972 album, Live in Concert with the Edmonton Symphony Orchestra, on October 26th via Esoteric Recordings. The limited 180g vinyl LP edition of this release has been newly remastered and cut at Abbey Road Studios and includes a bonus 7-inch single which is a facsimile of a rare 1972 French picture sleeve release with edits of ‘Conquistador’ and ‘A Salty Dog.’ The CD edition includes five bonus tracks (two previously unreleased), drawn from the B-side of a single and the rehearsal sessions for the concert.

Recorded on 18th November 1971 at the Northern Alberta Jubilee Auditorium in Edmonton, Canada, the album captured a truly magical performance by Gary Brooker (vocals, piano), B.J. Wilson (drums), Chris Copping (organ and harpsichord), Alan Cartwright (bass) and Dave Ball (guitar), the Edmonton Symphony Orchestra and the Da Camera Singers. Classic Procol Harum material such as ‘Conquistador’, ‘Whaling Stories’, ‘A Salty Dog’ and the epic ‘In Held ‘Twas in I’ were beautifully arranged by Gary Brooker and the resulting album was one of Procol’s most successful and spawned a hit single in ‘Conquistador.’ It remains one of the finest collaborations between a rock band, orchestra and choir.

VINYL Edition Tracklisting
SIDE ONE
1. CONQUISTADOR
2. WHALING STORIES
3. A SALTY DOG
4. ALL THIS AND MORE

CD Edition Tracklisting
1. CONQUISTADOR
2. WHALING STORIES
3. A SALTY DOG
4. ALL THIS AND MORE
5. IN HELD ‘TWAS IN I