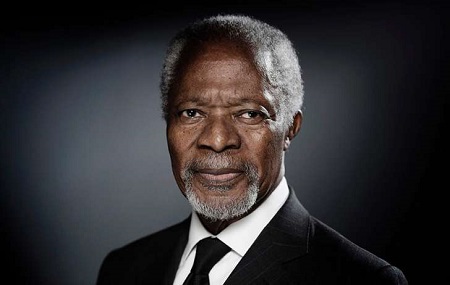 Peter Gabriel penned the following tribute to Kofi Annan, the first black African to lead the United Nations, who died at the age of 80. 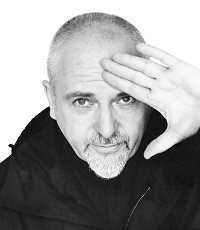 “Today we have suffered a great loss – Kofi Annan, Seventh Secretary-General of the United Nations and our much-loved chair of the Elders.

“All those of us who work with the Elders are in shock. We have lost not just a great and inspiring leader but a good friend and one of the great peacemakers of our time, rightfully recognised by a Nobel prize.

“He believed in the power of quiet diplomacy and in the essential right of all to peace – and that all disputes in the end have to be settled around a table, so the sooner the serious talk begins, the sooner you can put an end to the suffering.

“He adopted many causes, but always championed human rights, including access to healthcare, education and opportunity. He was one of the first leaders to realise that the trickle of refugees and migrants would turn into a flood of desperate people, with thousands of completely avoidable deaths, prison-like refugee camps, along with unwanted immigration that would fan the flames of populist racist politics.

“Occasionally he was criticised for caution, but it was so obvious, the more you got to know him, that it was his underlying passion for peace, justice and his basic compassion that determined all his actions.

“Kofi was a devoted family man and it was always a pleasure to see him and Nane together, their love and respect for each other a lesson in itself.

“After retirement, he undertook a work schedule that would have been punishing for someone half his age, and when Richard Branson and I joined him at his 80th birthday party earlier this year, he was as full of plans, as ever, of what we could all do to improve life for those least well off all over the world.

“It was an honour to get to know this extraordinary man and to learn what a warm and kind person he really was, whose gentle nature and humour, along with a very infectious laugh, could illuminate as much as it could melt away tensions.
The world seems a lot emptier without him.”