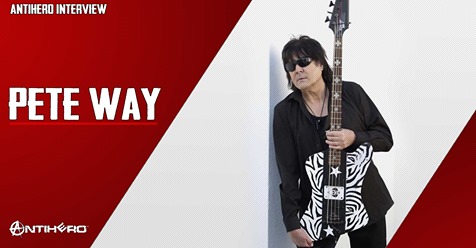 The website Antihero recently conducted an interview with legendary bassist Pete Way. An excerpt from the interview can be found below. You can read the entire interview @ this location.

ANTIHERO: We chatted several years ago. I was asking about your health. Because, I think when we last talked, it was way back in 2014, you’ve had several major health scares/concerns.

Pete Way: Yeah. No, I had prostate cancer and I’ve had three minor heart attacks. But you know. Take life as it comes. We’ve been doing shows and they’ve been going great. Going to make the next step to bigger venues. Pretty much everywhere we play sells out. We needed to get our feet on the ground. Again, my health. Never too sure of it. The older you get; you never know what’s beyond that door.

ANTIHERO: Of course. Since we last talked you’ve had a couple of your former bandmates, Eddie Clarke and Paul Raymond, that have unfortunately passed.

Pete Way: Yeah. Oddly enough, despite what I used to use, I never smoked. I don’t think Paul Raymond smoked but Paul Raymond was older than me. But Eddie is a total shame. He, back in the day, smoked. Oddly enough, though, he got slow but the complications came from the fact that his lungs weren’t good. You know. It’s something that just reminds me all the time. And yet I’ve done just about, I wouldn’t say every drug in the world, but really pushed it to the limit. Thousands and thousands of drugs. In fact, my body so I can’t… They try and take a blood test off me and they can’t because they can’t get to my veins. I had veins removed just so that my system was working again, you know. Anyway, that’s the last of my medical history. Actually, the worst I can do is a couple of glasses of white wine.

ANTIHERO: So, just touching on another band from your past. Obviously, you want to focus on what you’re doing now. I’m just wondering how you feel about bands, generally, from the 80s and that era who are continuing to go and operate to release music. Sometimes I think, specifically, in the case of Fastway without or any of the original members. Fastway. I mean, obviously, yourself and Eddie…are not involved and that band is still around.

Pete Way: Oh Fastway! I never actually played with Fastway, you see. Chrysalis Records put a court injunction on me, stopped me from signing with CBS. That’s why I had to do Waysted and how come I toured with Ozzy. Ozzy said to me, “Oh, I was doing nothing,” and I was his drinking partner. We went out. I did Bark at the Moon dates in England and after that, I started rehearsing with Wasted. Also, at the same time, I produced Twisted Sister’s first album. I like to keep busy at the right time.

ANTIHERO: Yeah. Health permitting, of course. Who would have been the most influential musician that you’ve worked with? Who have you learned the most from?

ANTIHERO: Any particular album that’s you’ve recorded that stand out for you? And stand up, even today?

Pete Way: Well, probably Strangers in the Night because it was, you know. That was a summary of many years on the road, many albums and it was very successful. And it proved how good we were live.