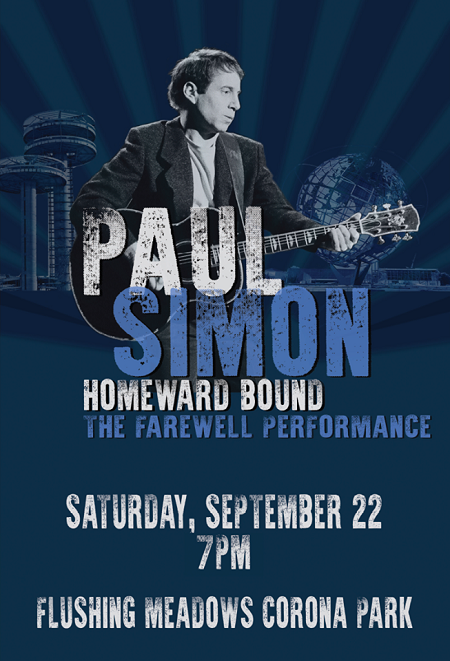 “Goodbye to Rosie, the Queen of Corona…”

Legendary songwriter, recording artist and performer Paul Simon announced today he will perform the final concert of his Farewell Tour in the borough of Queens, where he spent his formative years. On Saturday, September 22 at Flushing Meadows Corona Park, Simon and his band will bring to the stage a stunning, career-spanning repertoire of timeless hits and classics, as well as a unique selection of songs the artist has selected for this once-in-a-lifetime show.

Simon will be donating all personal net-proceeds from the event to a previously-selected cause, which will be announced at a later date.

General public tickets on sale Friday, June 29 at 10am ET

General Public On Sale:
Friday, June 29 at 10AM ET at this location.

“It seems more like fate than coincidence that I should do the final show on this final tour at Flushing Meadows Corona Park. I could have ridden my bike from home to the park in about 20 minutes, when I was a kid. But this is less a goodbye than a farewell. Thank you all for the ride, I had a great time.” – Paul Simon

“When Paul Simon sings ‘Homeward Bound,’ there’s no doubt he means New York. The grit, beauty and complexity of this city are woven into Simon’s most haunting songs, and our greatest venues have formed the backdrop of his performing career. It’s only fitting that this son of Queens comes home to Flushing Meadows Corona Park.” – Mayor Bill de Blasio