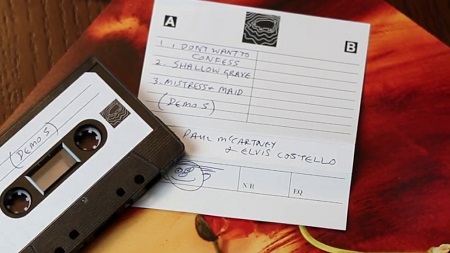 The cassette will be available April 22 and comes after an expanded reissue of Flowers in the Dirt, the 1989 album that featured songwriting collaborations with Elvis Costello that went to No. 1 in the U.K.

McCartney says: “The demos are red hot off the skillet and that’s why we wanted to include them on this boxed set.

“What’s great about these songs is that they’ve just been written, so there’s nothing more hot off the skillet as I say. That was the kind of great instant thing about them.

“I hadn’t listened to them in ages but when I did I knew we had to put them out. We made a little tape of them and sent them to Elvis, who loved them too. We said we should put out an EP or something and now the moment’s finally arrived.”

The remastered version of Flowers in the Dirt will be available on March 24th. Formats include a two-CD, two-LP and a three-CD/DVD deluxe edition that features previously unreleased demos, unseen archival video, a notebook of McCartney’s handwritten lyrics and notes, unpublished images from Linda McCartney and a 112-page hardcover book documenting the making of the album. The deluxe edition also includes digital downloads of a trio of unheard cassette demos.