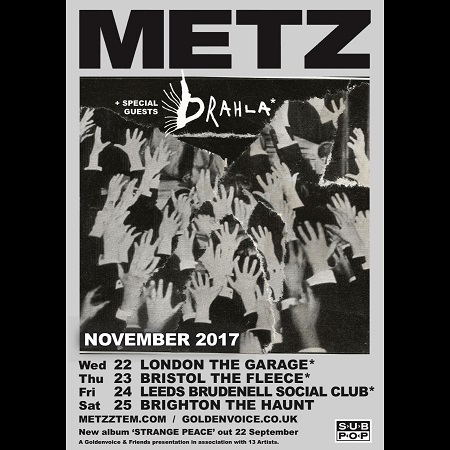 Canadian punk rockers Metz will be launching their UK tomorrow (11/22) in London at The Garage. The 4-date trek will wrap up on November 25th in Brighton at The Haunt. A list of dates can be found below.

METZ released their third full-length album, Strange Peace, on September 22, 2017 via Sub Pop Records. The album was recorded in Chicago, live off the floor to tape with Steve Albini. The result is a distinct artistic maturation into new and alarming territory, frantically pushing past where the band has gone before, while capturing the notorious intensity of their live show.

“Recording in Chicago was a blast. We tracked fourteen songs in four days. It was the first time we felt confident enough to just play live and roll tape,” guitarist/vocalist Alex Edkins said of the recording process. “Strange Peace is much more diverse and varied than anything we’ve done before, which was exhilarating, but terrifying, too. We took the tapes home to Toronto feeling like we’d made the record we wanted to make.”

Their song “Drained Lake” has been embedded below.