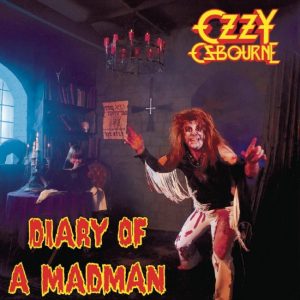 Rock and Roll Hall of Fame inductee and Grammy®-winning singer and songwriter OZZY OSBOURNE will celebrate the 40th anniversary of his 1981 DIARY OF A MADMAN with an updated digital release that includes a new track: a live version of his Mainstream Rock Top Five hit “Flying High Again.”

The album was listed at #15 on Rolling Stone’s 2017 list of “100 Greatest Metal Albums of All Time.” Kory Grow noted, “A year after proving he was still a vital musical force on his first post–Black Sabbath solo LP, 1980’s Blizzard of Ozz, Ozzy Osbourne demonstrated it wasn’t a one-time fluke with an album of poppy and gothic anthems like ‘Flying High Again’ and the almost classical closing title track. Guitarist Randy Rhoads, who died in a plane crash while touring for Diary in 1982, had already proven himself a virtuoso on Blizzard; here, he worked even harder to find the rare nexus between showboat chops and clever songwriting…”

THE DIARY OF A MADMAN 40th Anniversary Expanded Digital Edition tracklist is as follows: