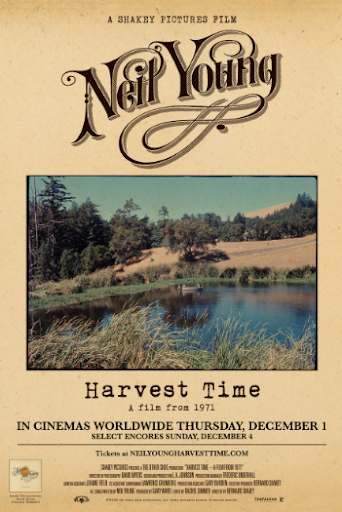 Tickets are on sale and the official trailer debuted today for “Neil Young: Harvest Time,” the never-before-seen docufilm celebrating the 50th anniversary of Neil Young’s bestselling album Harvest. Presented by Shakey Pictures, Trafalgar Releasing, and Warner Records in movie theaters worldwide on Thursday, December 1 with select encores on Sunday, December 4, the feature includes footage from Northern California, London, and Nashville, during the signature album’s creation. The exclusive cinema event begins with a personal introduction from Young about the film and album.

Tickets are on sale now at NeilYoungHarvestTime.com.

Visit the website for ticketing and the most up-to-date information regarding participating theaters.

Created between January and September 1971, this docufilm takes viewers on an intimate journey to Young’s Broken Arrow Ranch in Northern California for the “Harvest Barn” sessions, to London for an iconic performance with the London Symphony Orchestra, and to Nashville where the then 20-something Neil Young worked on various tracks of this signature album. Performance and rehearsal content is intertwined into creative storytelling and includes most of the tracks from album Harvest (released in 1972) including “Heart of Gold,” “A Man Needs A Maid,” “Alabama,” and “Old Man.”

The premiere in cinemas of the “Harvest Time” film is in celebration of the release on Dec 2nd of the 50th Anniversary Edition Box Sets on Vinyl and CD of the beloved Harvest album; boasting the original album, three studio outtakes on CD/7” vinyl, an unreleased live 1971 BBC solo performance on CD/LP and DVD. Also included in the box sets is a hardbound book and fold-out poster. The vinyl box sets include a lithograph print. Click HERE to pre-order/pre-save via The Greedy Hand Store at Neil Young Archives (NYA) and it’s also available at all retail.

About Trafalgar Releasing
Trafalgar Releasing, the global leader in event cinema distribution, harnesses the power of cinema to bring fans together in more than 13,000 locations in 132 countries worldwide. A subsidiary of Trafalgar Entertainment, Trafalgar Releasing’s worldwide operations include production, acquisition, marketing, and distribution of live or pre-recorded content to cinemas led by an international team of specialists. Featuring live concerts, music documentaries, world-class opera, award-winning theatre, and more from the leading names in entertainment such as BTS, Metallica, Oasis, Coldplay, Billy Joel, George Michael, Twenty One Pilots, the Royal Opera House and more, Trafalgar Releasing has shattered event cinema box office records, most recently with the BTS Permission to Dance on Stage – Seoul: Live Viewing concert which grossed more than $32.6M at the global box office. More information about Trafalgar Releasing can be found at http://www.trafalgar-releasing.com.

About Neil Young Archives (NYA)
Neil Young Archives is a playful vision of an artist’s archives and a utopian vision for artist-focused music streaming. On NYA you will find all of Neil’s music you’d expect to find—every studio album from Buffalo Springfield through Barn, every live album and compilation, a selection of important 45rpm singles—and a lot of music you might not expect—site-exclusive album outtakes and demos, unreleased and unedited live performances, bootlegs and archival released of shelved records—in crisp and intimate high resolution.* Another surprise for the uninitiated: streaming music is just the tip of the iceberg! The folders of NYA’s filing cabinet also contain original manuscripts, session documentation, tape boxes, record reviews and tour press, memorabilia and ephemera, every feature film and music video, photographs from across the span of Neil’s career and, if you’re willing to poke around to find them, dozens of treasures hidden in plain sight. It’s all a bit overwhelming—we’re trying to simulate walking the shelves, taking down boxes and flicking through folders holding Neil’s entire career, after all—but getting lost in the stacks is half the pleasure.

Previous: W.A.S.P. “Blood drive happening at tonight’s venue in Boston” – 2022 – Big Night Live – Armored Saint
Next: The Nightwish Crew is leaving for the start of the European leg of our World Tour! – 2022 – TICKETS/DATES