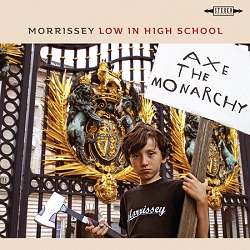 “Jacky’s Only Happy When She’s Up on the Stage,” the official video from Morrissey, has been embedded below. The track is taken from his latest album, Low in High School, which was released worldwide on November 17th.

Low in High School debuted at #5 on the UK Albums Chart after selling nearly 26,000 equivalent copies in its first week. With more than 6,700 vinyl copies sold in the first week, Morrissey took the #1 spot on the UK Vinyl Chart.