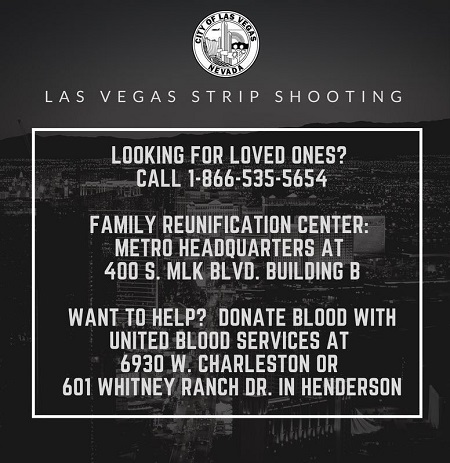 Who was #LasVegas gunman Stephen Paddock?https://t.co/BK8Jjm7ak5

Las Vegas shooter lived in a retirement community in Mesquite, NV. Lived with a woman who is out of country. Shooter’s family in shock.

Photographer on concert stage when the shooting began: “These girls were just screaming & crying & covered in blood” https://t.co/O7XhwaHAc7

My warmest condolences and sympathies to the victims and families of the terrible Las Vegas shooting. God bless you!

Michelle & I are praying for the victims in Las Vegas. Our thoughts are with their families & everyone enduring another senseless tragedy.

BREAKING: Police: Las Vegas shooter killed himself prior to their entry into his hotel room.

Photo shows broken windows on 32nd floor of Las Vegas hotel where a gunman opened fire on a music festival below https://t.co/7nE5kzGEdk pic.twitter.com/be1Ivxy1gm

Las Vegas shooting eyewitness: ‘It sounded like a thousand shots’ https://t.co/NqMrQukUsL via @GMA

With at least 50 people killed, the Las Vegas attack is now the deadliest mass shooting in US history https://t.co/1lG5iHRUWl pic.twitter.com/dKrEo27c4W

Video shows concertgoers scrambling over fences as they escape the gunshots in Las Vegas https://t.co/cVPvWaC0mB pic.twitter.com/5javPbLdST

Jason Aldean was on stage during a concert when shots rang out near Mandalay Bay in Las Vegas. pic.twitter.com/W3jEp7SN0u