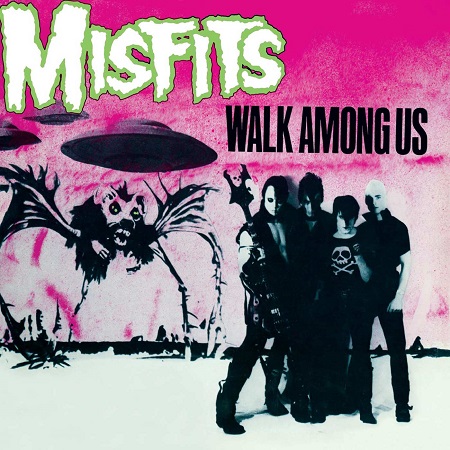 Walk Among Us is the debut full-length album by American punk rock band Misfits. The band’s first full-length album to be released (although it was actually the third to be recorded, after Static Age and 12 Hits from Hell), it was originally co-released by Ruby and Slash Records as JRR804 in March 1982.

Walk Among Us is the product of a January 1982 recording session at Quad Teck in Los Angeles, California, in which Glenn Danzig, for the most part, remixed previously recorded songs, overdubbing additional guitar tracks. Danzig also recorded new vocals for “Vampira” and mixed for the first time the live recording of “Mommy Can I Go Out & Kill Tonight?” that was recorded at the same time as the Evilive release.

The majority of the songs were originally recorded in a variety of sessions throughout early 1981 at the Mix-O-Lydian Studio in Boonton, New Jersey. The dates of these sessions are unknown, but they were all mixed at one time. “Vampira”, “Devils Whorehouse”, and “Astro Zombies” were recorded and mixed separately at Mix-O-Lydian in August 1981. “Hatebreeders” was recorded in June 1981 at Newsoundland in Fair Lawn, New Jersey. “Mommy Can I Go Out & Kill Tonight?”, the only live track on the album, was recorded on December 17, 1981, at The Ritz in New York, New York.

The song “Astro Zombies” was inspired by the 1968 horror film The Astro-Zombies.

The cover for Walk Among Us features the famous “Rat-Bat-Spider” that menaces the intrepid astronauts in 1959’s The Angry Red Planet. The flying saucers were obtained from 1956’s Earth Versus The Flying Saucers. The first LP pressing has a pink cover with a red logo, while the second pressing’s cover is purple with a green logo. Reissues since 1988 in all formats have varied in usage of either the purple or pink covers. – Wikipedia