Michael Schenker (UFO, Scorpions, MSG) does not hold back in his latest tirade, continuing to condemn his brother, Scorpions guitarist Rudolf Schenker.  This is not the first time Michael has aired out the bad blood publicly.

The problems first began last year when Michael said he was ‘disappointed’ in his brother for the way the Scorpions handled the release of their 50th Anniversary Box Set, particularly the re-release of their 1979 album Lovedrive (which Michael played on). Michael felt the description, in the Lovedrive reissue liner notes, was not accurate and undermined his time with the group. 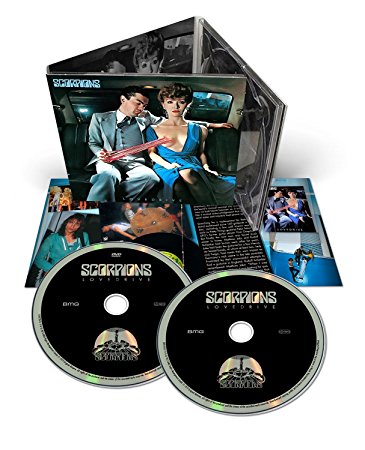 In an interview with Gigs and Festivals, Michael said, “I can’t trust them anymore. The whole Lovedrive story is wrong. They are putting it down as if I begged them to take me into the Scorpions. They begged me to join – I was already doing arena tours with UFO in the States. It’s unbelievable. Now I see that the Lovedrive story is written to their favor. They are the big guys.

“They’re just fooling people. I guess when you get older you get bolder or something, but I have absolutely no interest because I can’t trust them.

“If I look back now, it’s unbelievable – little bits and pieces I’m discovering. So putting together the whole picture, it looks like they’re absolutely desperate.”

Scorpions – Lovedrive, according to Michael

“ I was 23 when I finished with UFO, when Rudolf found out I had left UFO and Matthias (Jabs) who just joined could not do the album with the Scorpions to their liking, they asked me to help out. I came over and when I finished my work on the Scorpions Lovedrive album they didn’t want to let me go, they got rid of Matthias. They basically persuaded me to be in the Scorpions after the Lovedrive recording, and all the management in America were very interested in wanting to sign the Scorpions. I started touring but after two weeks I could not do it I went away and was too shy to confront them. I couldn’t do it. My brother found me, he called me back, he cried on the phone and it was so embarrassing I came back a second time. After the second time I realized, this is not it . I need to stop this and I went away again. I found out they got Matthias back.

“Later, I get a phone call from Rudolf (asking) if I would let him play my black and white guitar design, I said okay. He also asked me if I would give him the songwriting credit for ‘Coast To Coast’; all the melodies were written by me and I didn’t pay attention. I was the six part (member) of the Lovedrive album and I have a contract everything was divided by six.

“So when they approached me just recently for the Scorpions (Lovedrive) Deluxe Box, I found out that they put a bio out that was completely the wrong story. I found out there was nobody credited for what I wrote on ‘Holiday’; it’s the intro to ‘Holiday’, 45 seconds long, that intro that I wrote. And then Rudolf asked me to give the melodies for ‘Coast To Coast’. And those two things were the most tastiest and the easiest parts to copy because Rudolf is not really a great guitarist. And all the managers finding out they wanted to sign that band the Scorpions that I was part of, I guess he figured how he can misrepresent and fool people all these years because I didn’t pay attention until just recently. There was not a picture of me on Lovedrive, there was no mention on ‘Holiday’ who wrote and played that intro and of course Rudolf persuaded me to give him the ‘Coast To Coast’ melody. I must say I am now finding out more and more weird stuff about Rudolf. I have to stay away from him and I can’t trust him anymore, period.”

Michael Schenker recorded lead guitars on “Another Piece Of Meat”, “Coast To Coast”, “Holiday”, and “Lovedrive”.  At the beginning of the Scorpions’ German tour in February 1979, it was announced that Michael had rejoined the band after the group reluctantly parted ways with Matthias Jabs. However, in April 1979, while the band was touring in France, Michael quit, leading to Jabs’ immediate return.

Now in a new interview with Music Mania Podcast, Michael doesn’t hold anything back.

“I taught Rudolf how to play guitar, I taught him how to…He learned from me how to write songs. He wasn’t able to write any song. Everything I did with Klaus (Meine) he copied, and basically copied my melodies, he copied everything. He wanted to present a fake, to be a Michael Schenker, confuse the people. And Michael Schenker was off the scene anyway; he was enjoying himself, having fun with experimenting with music, being out of the spotlight. So Rudolf had a clear way to do his thing. But I didn’t know about it. So, in the meantime, when people were asking me in the last thirty years, ‘Oh, what do you think of your brother’s success?’ I said, ‘Yeah, more power to Rudolf. I’m happy for him. As long as Rudolf is happy, I’m happy for him.’ One day I heard him coming into the kitchen at my mom’s place, and he said, ‘This fucking rat race.’ So I knew he wasn’t quite happy, even though he was successful.”

Michael continued, “The thing is, he’s doing the opposite of what I do: he steals things, and I focus on the art of lead guitar as pure self-expression; it’s the exact opposite. Rudolf just looks at the trends and sees what’s there and copies everybody else who is successful and does the same thing, and that’s all. It must be a very boring life, but I guess he likes it. But then again, if he comes into the room saying, ‘Fucking rat race,’ maybe he’s not that happy.”

“I think he’s now with a new family; he has got a new child, and as much as I can see my life design in three stages, I can actually see Rudolf’s life design,” Michael said. “So I’m not bitter about this whole thing. I’m just disappointed that Rudolf had to do it with cheating. He could have established that without cheating. But he has a new family, and I think through the pureness of his child’s eyes, he will learn something — he will learn what real happiness is. And I think he needed this kind of fake success, or whatever you wanna call it, but he has definitely experienced success and he knows what it tastes like, and he knows that it is a fucking rat race. So, therefore, he has now an opportunity to… He has long enough [left] to live a life in a completely different way with a new family, and he will be taught, and he will experience and learn that what real happiness is. It’s something very different than that what he was chasing all his life, and that what he was chasing so desperately, he even cheated. But I think he will live long enough — equally as long as he has success — to learn all of this, and he will be blessed, and he will have a fulfilled life and he will make a great realization on his last days. And I’m happy for him for that. And I guess that’s the way it had to go.”

At a Scorpions press junket last year, his brother Rudolf was asked about his thoughts on Michael’s initial comments.

Rudolph said, “some people were sending me stuff, but I can say to all these things – I love my brother. He’s an outstanding guitar player. That’s all what I can say.”