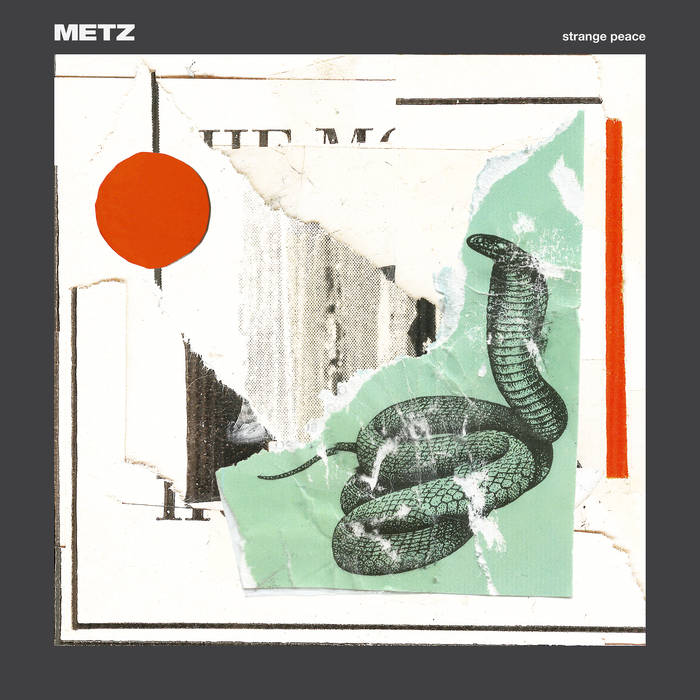 METZ released their third full-length album, Strange Peace, yesterday (9/22). The official video for the new track, “Cellophane,” has been embedded below.

Since releasing their self-titled debut record in 2012, which The New Yorker called, “One of the year’s best albums…a punishing, noisy, exhilarating thing,” the Toronto-based 3-piece METZ have garnered international acclaim as one of the most electrifying and forceful live acts, touring widely and extensively, playing hundreds of shows each year around the world.

Strange Peace was recorded in Chicago, live off the floor to tape with Steve Albini. The result is a distinct artistic maturation into new and alarming territory, frantically pushing past where the band has gone before, while capturing the notorious intensity of their live show.

“Recording in Chicago was a blast. We tracked fourteen songs in four days. It was the first time we felt confident enough to just play live and roll tape,” guitarist/vocalist Alex Edkins said of the recording process. “Strange Peace is much more diverse and varied than anything we’ve done before, which was exhilarating, but terrifying, too. We took the tapes home to Toronto feeling like we’d made the record we wanted to make.”

The trio continued to assemble the album (including home recordings, additional instrumentation) back in their hometown, adding the finishing touches with longtime collaborator, engineer and mixer, Graham Walsh.

“The songs on Strange Peace are about uncertainty,” Edkins explains. “They’re about recognizing that we’re not always in control of our own fate, and about admitting our mistakes and fears. They’re about finding some semblance of peace within the chaos.”