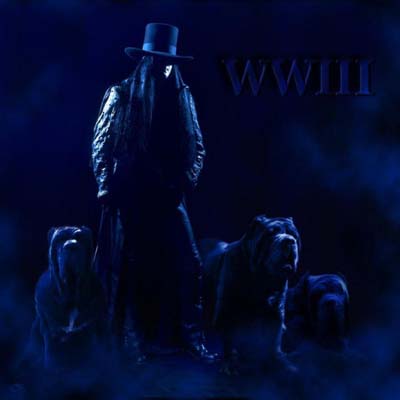 full in bloom: You formed WWIII in the late ’80s. Did you actually have full-time members in the band before you signed with Hollywood Records, or were they paid musicians? Who were some of the members during that time in Los Angeles.

Mandy Lion: I had so many people coming and going in WWIII it would make Spinal Tap jealous (laughs). I had for example the complete lineup from Kingdom Come in my band at one point. Then there was the lineup of Johnny Crash…the list goes on and on. 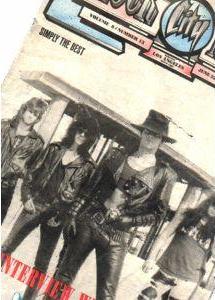 full in bloom: Eventually you met Don Arden, who was not only known for being one of the elite managers – managing Black Sabbath – but also known for being Sharon Osbourne’s father. What was it like working with him over the years and what were some of the aspects that set him apart from other managers?

Mandy: Don Arden is about as close to a real life Godfather as you can get… Just to give you an idea how heavy this guy is… The manager for Led Zeppelin (Peter Grant) started as Don Arden’s chauffeur! He and his son David Arden made more stars and had a bigger influence on modern music than any other team in the history of music… Absolute geniuses. Don and David scare the shit out of most people but since we had that in common, we got along just fine.

full in bloom: You were breaking club attendance records in Los Angeles before you ever signed a record contract. Please describe a typical ‘Day in the Life of Mandy Lion’ during that time.

Mandy: Yes, we did break some attendance records during that period… For example we out-did Van Halen’s long-standing record at Gazzarri’s. A typical day would have been the same as it is now… I get up at about 5 PM, feed a baby to my dog, workout, pull the latest cage girl out of the coffin to spank some circulation into her pale little ass and as soon as the sun goes down I am ready to take the Phantom ( my 8 cylinger, 1500 pound, 600 horsepower motorcycle) out and scare the shit out of any senior citizens I see… Then by about 10 PM it is time for either rehearsal or recording… At midnight I take my K9 son for a walk hoping no one sees him dropping compact car size turds on the sidewalk. Then for the rest of the night I just try to be as decadent as one can be without getting arrested. 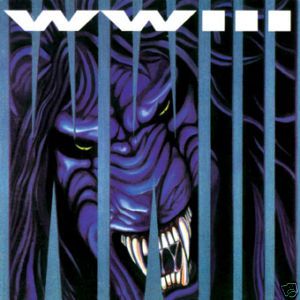 full in bloom: Tell us about the day you signed with Hollywood Records?

Mandy: The day I signed with Hollywood records was not half as exciting as it was picking up that first check from the bank, my friend… I took out a shitload of cash and slept in it for a week.

full in bloom: What was your experience like being signed to Hollywood Records?

Mandy: I don’t think anyone ever sold anything on Hollywood records… I remember Don Arden saying that they could not sell a hooker in a brothel… That just about sums it up… They couldn’t even sell the Queen catalog… I mean… What the fuck…???

full in bloom: What was the process like gathering musicians for the WWIII self-titled release. Was there anyone that you passed on?

Mandy: I did audition many musicians for the lineup but I would rather not mention the big name players I ended up passing on because it is not fair to them. Just because someone is not the right guy for a particular project does not mean that they are not just as talented as the guys that did work out for that particular sound… Jimmy (Bain) and Vinny (Appice) were perfect for what we did back then and as soon as I heard them doing the stuff it was a no-brainer.

full in bloom: What was it like working with them?

Mandy: Working with Jimmy and Vinny was a dream come true for a very young Mandy Lion… These guys are everything you heard they are and then some. Great people as well as awesome musicians.

full in bloom: Any memories stand out from those recording sessions? Where was it recorded? What was the budget for the record?

Mandy: The budget for the first WWIII CD was big but we had so many starts and stops with different producers, and then Tracy G. ate up about 80 percent of the money just to do his guitar tracks, so it ended up being a pretty tight budget in the end… I mostly remember arguing with the producer about levels and such… It was not the most fun recording I have ever done, let me tell you… 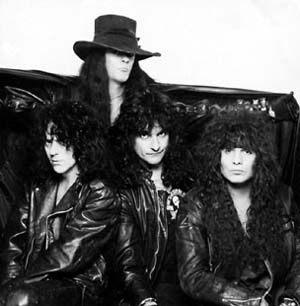 full in bloom: 3 fond memories of your days in WWIII (early ’90s era).

Mandy: My favorite day during those early days would have been coming home to LA doing a sold out show at Irvine Meadows in front of 17,000 fans…

full in bloom: What was the deal with you being touted as a NEO-NAZI? Didn’t the album have a Hitler slogan on it and wasn’t it even misspelled?

Mandy: The Hitler slogan (laughs)… Well, let me tell you a story about the dumbest motherfucker to ever walk this planet… Once upon a time there was a retard by the name of Steve Jones – NOT the guy from the Sex Pistols – who was a frustrated and failed musician who hoped that since no one wanted to hear his ideas he would find a victim (a band) whom would indulge him in using his dumb ass songs and ideas… Unfortunately, that band he hoped would do that for him was WWIII. When he realized that Mandy had his own ideas he felt the only way to get his idiotic ideas heard and seen was to just not tell me and go behind my back. This moron felt that being a Nazi band would sell cds! When I told him I thought that was stupid, for one, and I was not into the whole Nazi thing, he decided to put that slogan on the cd anyway. I remember trying to get him to show me the final artwork for the cd but he would have one excuse after another until the cd actually came out! I never saw it until I eventually went to a store and bought a copy for myself! When I opened that cd I just about lost it! There it was! A Hitler slogan! AND IT WAS SPELLED WRONG!!!! Can you imagine this idiot spelling it wrong…??? Not only did this ass make me look like a Nazi but he made me look like an illiterate Nazi! Someone should kick his mother’s ass for shitting him onto this planet on that dreadful cursed day! Ugh!!!

full in bloom: After WWIII, you began working with Jake E. Lee, who is one of my all-time favorite guitarists. Aside from that, I am probably one of a few that actually believe the records he did with Ozzy were the best from the Ozzy catalog. What was your experience like working with Jake?

Mandy: I agree with your opinion on Jake… I feel that Jake is one of the most gifted players ever! The man is much more talented than people even know because you only see a tiny bit of what he is capable of in any given band. The man is an amazing artist, great performer and one of the most intelligent people I have ever met. Nothing but respect for that man. Working with him was not easy as it never is when one is working with a true genius but I am glad I had the opportunity to work with him.

full in bloom: Describe the songwriting process between you and Jake?

Mandy: Writing songs with Jake would basically be him making me a copy of some riff ideas and me taking them home and coming up with ideas to what he had given me. Then I would bring the recorded ideas back to his house and he would feed off of what I had given him and so on… It truly was a give and take thing. 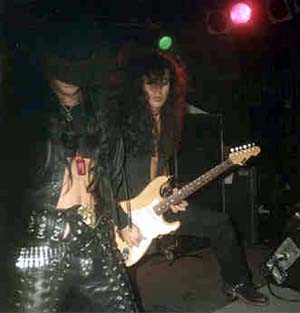 full in bloom: Are there any highlights from the tour you did with him in 1994?

Mandy: There are many highlights from that tour for me but most of them are too nasty to talk about here… Other than that I would always have a great time watching him do his solo on that George Lynch collaboration song I did… Man did Jake tear up that song on a nightly basis… It was like watching someone channeling Hendrix. Amazing…

full in bloom: Why haven’t any of the songs been released?

Mandy: I am not sure at this point whether or not any of the songs I did with Jake will ever be released. We finished about half a CD back in the day and of course I would love it if we could finish it at some point. If that ever happens I just don’t know.

full in bloom: What was it like working with George Lynch?

Mandy: Working with George Lynch was the most fun I have ever had recording. The man is a great songwriter and he is a lot heavier than most people think he is because of his commercial rock past. I would love to one day do a super heavy George Lynch / Mandy Lion CD. People would have to use a pick up truck to buy that CD and take it home… It would be THAT heavy!

full in bloom: Any moments stand out from those recording sessions?

Mandy: The best thing that happened during that recording session was when Glenn Hughes complimented me after watching me record this song. He said that this was the heaviest vocal performance he had ever heard in his life… I think I grew another inch that day…

full in bloom: What is it like working with producer / guitarist Joe Floyd? Didn’t your band re-record one of Joe’s songs, “Fighting for the Earth,” from his former band Warrior?

Mandy: I believe that Joe Floyd is the best heavy metal producer on this planet. The man gets the sounds and he knows what a great vibe is all about. If it were up to me I would never record anywhere else again. When we did that Warrior tune it was because he said that he always wanted to do a rougher version of that particular song… A more primal vibe was what he wanted… Primal is what I do…(laughs)

full in bloom: Mandy Lion is transported back to the year 1989. Is there anything you would do differently?

Mandy: If I were back in the year 1989 there would be a few things I would do differently… I would listen to my manager and NOT use Tracy G. on guitar, I would kick Steve Jones’ ass and have his mother sent to a Turkish prison until she regrets not flushing that unholy seed down the toilet when she had the chance.

Mandy: I would say kissing my dog’s paws would be considered by most to fall into that category.

Mandy: That is easy: Her name is Lindsay.

Mandy: Why the fuck did you let Steve Jones happen!!!???

Mandy: That is easy: AC/DC!

Mandy: Playing doctor and taking a hot babygirl’s temperature with my tongue. Take care my friend and stay in touch.