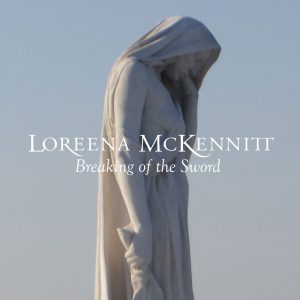 Loreena McKennitt honored the sacrifice of members of the armed forces and their families with a new song called “Breaking of the Sword.” The track is about love, loss and family sacrifice and has been released for Remembrance Day (Armistice Day), November 11th. It’s her first original track since the 2006 album An Ancient Muse. Listen to the song below.

McKennitt wrote “Breaking of the Sword” in the first person from a mother’s perspective. It describes the sunny April morning when the child is born and how he grows up to work in the fields and stables alongside her. The war then calls him away where he is killed in battle.

“When you lose a child, that unimaginable loss and longing is felt the world over. It transcends borders and cultures and time itself,” says McKennitt.“I would like to feel the sentiment of this song is both timeless and universal,” adds Loreena, who brings to the song both her abilities as an artist and her insights as Honorary Colonel of the Royal Canadian Air Force.

“Breaking of the Sword” is exclusively available digitally, via iTunes, Amazon Music Unlimited, Apple Music, Spotify, Google Play Music and more. Proceeds from digital sales in Canada will be donated to the Canadian Armed Forces’ Support Our Troops Fund, which provides financial support and assistance to members of the Forces, veterans and their respective families.