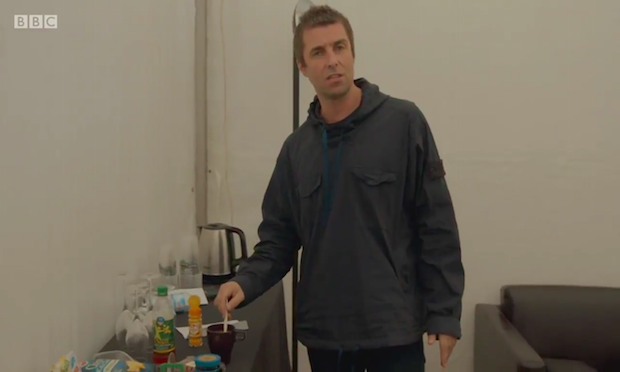 Transcribed by fullinbloom:
“Yeah it’s good for the voice, or so I’m told.”
Drinks a sip of tea
“It’s fucking good, man. Now in the 90s I got someone else to do it, but now I can’t, fucking money is tight, too tight to mention. Gotta do it yourself, haven’t ya? No one buys records these days. In the 90s I had about four people doing it. Little geezer doing the kettle, our kid, some other little fuck doing that and some other little fucking idiot doing that. Now you gotta do it yourself these days, you know what I mean? Cause these fucking little smartasses download fucking tunes for nish. Then they wonder why there’s no real rock stars around. Cause this is the shit you got us doing, fuckers.”

Gallagher’s upcoming solo album, As You Were, will be released October 6th via Warner Brothers Records.

Liam Gallagher making tea is the best thing you'll see today. As you were. pic.twitter.com/JaAB0p6Qr2