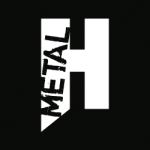 1980 was an unbelievable year for metal. Priest released British Steel alongside Ace Of Spades, Iron Maiden, Back In Black, Heaven And Hell, Blizzard Of Ozz – so many classics of the genre. What was that year like for you?

“So exciting. The 80s was a decade of decadence, and the mix of heavy metal from Judas Priest to Mötley Crüe was amazing. For us to make a record that went on to be a standard-bearer was such a big moment, it stands alone; we’ve never made another record like it, and we never will.

The industry was thriving; we’d sell half a million records in a week in the US alone! There was this sense of economic security for a lot of people, so shows were selling out and they were buying t-shirts and records, cassettes, all this crazy excitement… you just got caught up in it all.”

Speaking of the 80s, Live Aid in 1985 was a once-in-a-lifetime event, with simultaneous concerts in London and Philadelphia, and you guys and Sabbath were the only bands representing metal that day…

“…And we both played Philadelphia! Ironic, isn’t it? There were no metal bands at Wembley that day, how mad is that?! Bill Curbishley was managing us, and they said they wanted The Who. Bill turned around and said, ‘OK, but you’re also having Judas Priest.’ Bob Geldof knew us, so that was fine.

But the fact that you had two of the prominent British heavy metal bands playing a stadium in America and being beamed around the world was another milestone for metal. We were being heard in some people’s living rooms for the very first time! I spent most of the day with the punters out the front, banging my head and screaming, ‘Madonna! Mick! Planty! Jimmy!’ – it was one great talent after the next. It was a once-in-a-lifetime event, and I was there. I was there, man!”

What sort of mindset were you in when you left Priest in 1992?

“Let me start by saying I’m not the first lead singer to leave a band. I call it LSD: Lead Singer’s Disease. I always have to emphasize that it was a classic case of communication breakdown. After the Painkiller tour, we were like dead dogs, we were exhausted. I’d said years before that at some point I might want to wander off and do something different and they’d all given me their blessing. It wasn’t cunning, or unexpected, it was just the way things went.”

Did you ever listen to Priest when Tim ‘Ripper’ Owens was in the band?