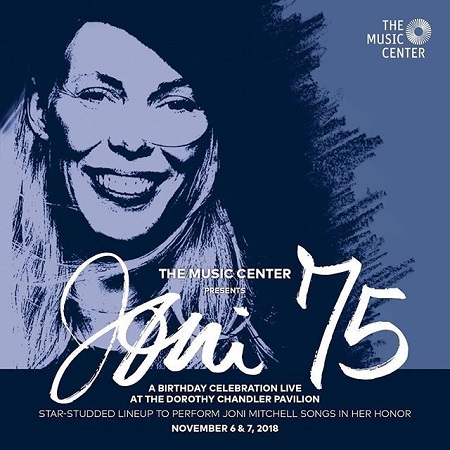 JONI 75: A Birthday Celebration Live at the Dorothy Chandler Pavilion
Star-studded Lineup to Perform Joni Mitchell Songs in Her Honor

In celebration of Joni Mitchell’s tremendous career and her 75th birthday, The Music Center will present two star-studded concerts, JONI 75: A Birthday Celebration Live at the Dorothy Chandler Pavilion on November 6 and November 7, 2018, featuring an incredible array of singers and musicians who will perform Joni Mitchell songs in her honor. On both nights, Glen Hansard, Emmylou Harris, Norah Jones, Chaka Khan, Diana Krall, Kris Kristofferson, Los Lobos, Graham Nash, Seal, and Rufus Wainwright will perform songs from all stages of her life, across the entire oeuvre of her 19 studio albums. Co-musical directors/arrangers for the concert are drummer Brian Blade, who recorded three studio albums and toured extensively with Mitchell, and pianist, composer, arranger and producer Jon Cowherd.

Joni Mitchell performed on the stage of The Music Center’s Dorothy Chandler Pavilion on two occasions, in 1972 and 1974. The Los Angeles Times headline for the 1972 concert read, “Joni Mitchell in a Giant Living Room” and, in 1974, read, “’New’ Joni Sparks Dancing in the Aisles.” The concerts will be a return of her music to the Dorothy Chandler Pavilion, creating both an intimate “living room” experience and a joyous celebration of her work by artists who have been deeply impacted by her music and wish to honor her through their performances.