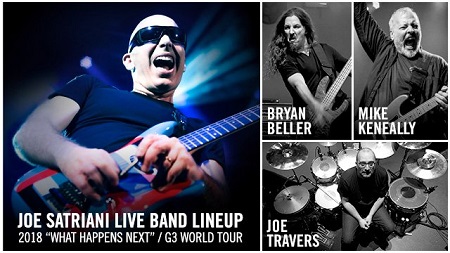 Guitarist extraordinaire Joe Satriani announced his touring band for 2018. The lineup will feature the return of Mike Keneally on keyboards and guitar, Brian Beller on bass and Joe Travers on drums.

In January, Satriani will embark on the U.S. leg of his G3 tour, where he will be joined by guitarists John Petrucci (Dream Theater) and Phil Collen (Def Leppard). Then in March, legendary guitarist Uli Jon Roth (Scorpions) and Petrucci team up with Satriani for the European/UK/Russian leg of the tour. Ticket info and dates can be found at this location.