Joe Montana Still Not Ready to Hand Over Title to Brady 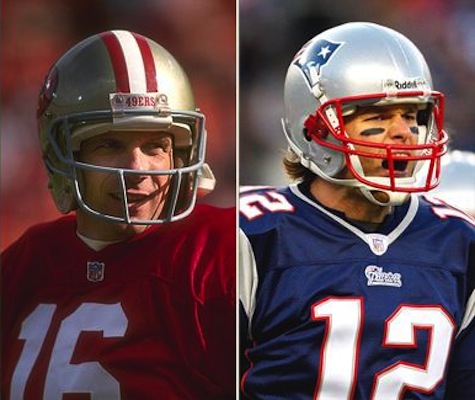 In a recent interview legendary quarterback, Joe Montana, was not willing to give the “best quarterback ever” title to Tom Brady. “I mean, he’s obviously having a tremendous career. I think it’s just hard to put anyone in that bucket,” Montana said of Brady during an appearance on Hallmark Channel’s “Home & Family”.

“Even before he got five, you look back to some of the guys some people don’t even know. Sammy Baugh or Otto Graham, I can’t remember which one, but one of them won like seven or nine championships — and so far ahead of their time,” Montana said. “It’s hard to compare guys from then to now, how they would compare here and we would compare then.”

Of course Montana is no slouch either, winning four Super Bowl titles. My godson once asked me about Joe Montana and I joked, “you’ve heard of the Holy Trinity, there’s God, then Jesus and then Joe Montana”. This coming from a Raiders fan while growing up and then becoming a Cowboys fan in 1990. But I loved the magic that Montana seemed to possess. It’s the same magic that Tom Brady possesses. I respect the Patriots for what they have done, cheating and all – like the other teams haven’t. In fact, every year I will watch their games with a deep desire for them to lose. As soon as they start winning, I turn the game off. I only enjoy watching them lose. But while watching this last Super Bowl and witnessing the greatest comeback in NFL Super Bowl history, I finally accepted it. Tom Brady is the greatest quarterback EVER! There hasn’t been another quarterback who has been able to maintain that drive to win, not to mention the consistency. Each and every year the Patriots are contenders. If the NY Giants didn’t have magic on their side, Brady would have two more Super Bowls under his belt. Throw in his undefeated season and it becomes easy to see that no one has done it better.  I have thought many times, ‘how nice it must be to be a Patriots fan’.  I wish I could, but I know next year I will still enjoy watching them lose…..those 2 or 3 games.

“At home you’re saying that all the time!” joked his wife, Jennifer.

“And don’t you forget it,” Montana replied.

Said Jennifer: “We are reminded constantly.”