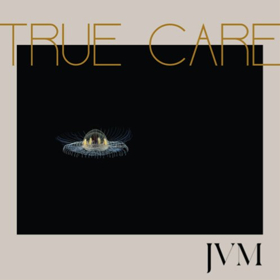 James Vincent McMorrow released the following statement about the album:

“True Care… what does that even mean….

“Iʼve no real clue, trying to find out…

“5 months it took, itʼs the best thing iʼve ever created… is it weird to say that?? fuck it.

“Could i have made it sound slicker? Yes. Spent more time finding the best mic positions on drums and guitar amps?…

“Thereʼs parts where youʼll listen and think ‘did that go out of time for a second?ʼ.. the answer is most probably yes, it did. Lot of one takes with no click tracks, in a room moving from sound to sound, idea to idea. I wasnʼt doing any of that because i was trying to reconnect with some mystical romantic notion of making music though. Fuck that. A) Itʼs 2017, and b) for my entire career iʼve made music on my laptop. Iʼve never understood that musical desire for nostalgia. The people you love from the past, they were looking forward…

“It felt so vital that I leave any flaws on display, not go back and sand off their edges. Music is so often elevated to a platform before the world has even had a chance to hear it properly. You know what i mean? It becomes this untouchable and intangible thing….. Iʼve done this with my own work before…

“This album is life, itʼs the life iʼve lived up to this point, itʼs the one that might be ahead of me. And sometimes life is magical. But other times itsʼ scary and fucked… honestly most times itʼs scary and fucked. It moves in and out of rhythm constantly. Itʼs rarely slick, rarely untouchable. Yes, you can capture some of those ideas in words, sounds, but if this album was going to feel like a true life, have it deep in itʼs bones, then it NEEDED to be instinctual and not laboured over to the point where it became that intangible unreal thing… real things are always a little fucked up is what iʼm trying to say i guess …

“I have no answers for anyone… No truths. No wider wisdom. I view things through the prism of my own world, thatʼs where iʼm creating from. For a long time I felt uncomfortable with all of this…. In my studio I felt safe. On stage I felt safe. But releasing music involves these huge campaigns, and with each one youʼre expected to come out with more and more profound high-minded visions for what youʼve created, wave your hands and hope people see you …. If you donʼt do that, then is the work somehow less profound?…Thatʼs what it can feel like. My discomfort stemmed from trying to find words and meaning to apply to the work I was creating beyond simply the work itself. It drove me sideways, i am not well built for it mentally, and because i was struggling to find those words constantly, what I ended up saying felt watered down, felt wrong, felt uninteresting to me, and ultimately ended up being less than i knew it could/needed to be. It broke my heart watching my work sometimes get misinterpreted, misunderstood. Donʼt get me wrong, I have shit to say… in fact most people in my life would probably say i could do with talking less…. but when it comes to music, i just always wanted to be quiet and peaceful with it….

“But it was my mistake. Iʼm not built to play that game. So why was I playing it? Iʼm built to create and to perform. Thatʼs it. So now iʼm just choosing to ignore that game, do things my way…

“so this is where iʼll speak..

“I had a vision for this album. I have a vision. Itʼs a simple one. It was about trying to find those simple markers for truth and care, to try and find a place where I could understand what it means to love and to be loved…. But not deified love, true simple love. For me, for my work, for the person, and the people I share my life with. I see people throw up phrases like “love conquers all”,,,, and I think, what does that even mean??…… it makes it sound like love is this grand weapon you can bluntly use to triumph over whatever might face you. But I canʼt help but think of it through the lens of my own experience, and through that lens it is a broken, beautiful, flawed petty creature, trying to make sense of the most basic of things. So to speak on truth and care and love through anything other than that same broken flawed petty creature would not be true. So I fixed a point in the future, December 2914, a time none of us will ever see. I used it as an anchor point, to help me start writing about my life now, my life before, and the complete abstraction that is my life in the future…. Life is long…. But then no it isn’t really. Finding a point 900 years in the future felt like the minimum distance someone like me would need to gain a perspective…

“……… Saying all this doesnʼt mean I wonʼt be talking more about this record. It just means that iʼll probably speak less, and when I do speak, it will be because I have something to say, not because the album campaign demands that I speak. Better to say nothing and let the music move Itʼs own way than to play a game you donʼt like..

“Itʼs probably a risk. Iʼm sure there are people working with me right now who see this as a risk, making a record so close to the last one, choosing to release it with next to no lead up time. Would people think it less profound because of that?? Maybe. Iʼm sure quietly to themselves, or in meetings iʼm not a part of, theyʼve questioned my decisions and my logic. Iʼm not sure I could blame them. The business is set up for a certain model, and iʼm choosing to effectively ignore that model…. But then who said I canʼt do this? I’m here to make music, to make it when it comes, to release it when it’s as fresh to me as it is to you.

“That makes sense. It feels right, reactive to the world I exist in, totally in line with how i create and how i take in other people’s art. Doing this has made me happier as an artist than i have ever felt before, and pushed me further. Truly. Iʼm always proud of the work I make, this process has brought me somewhere iʼve always wanted to go, but was beginning to think might never happen.

“And why not question the cycle and the path laid out before u? Fuck it, 8 years ago i was playing a few shows a year in front of 50 people, now i get to play across the world in front of a whole lot more than that. None of that came to pass by following a path. It came through my connection with the people listening to what I had to say, to them believing that what i was saying was substantial and real and mattered to them… So maybe you are all like me too….

“…Thereʼs also the reality that if people donʼt read this, then they might not understand the reason for this record. And thatʼs fine….. In a way thatʼs kind of the point. A huge part of doing this was to rewire myself, accept and embrace the fact that I canʼt go to each and every person and try and convince them that i am exactly who I say I am. In the past iʼve felt that desire “like if i could only speak to that one person and make them see….” But thatʼs bullshit, itʼs a futile and pointless thing. We are what we are, we believe what we believe. All I can do is create what makes me happy, trust that even if that understanding doesnʼt happen right away, that time and distance can change anything.”