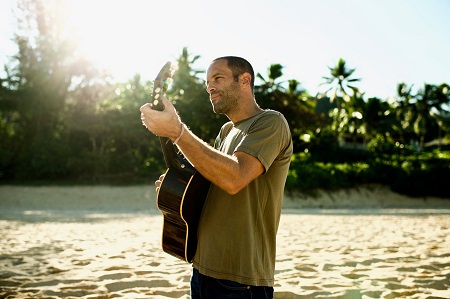 UPDATED: The live interview is over, but you can still watch it by clicking the link below. Once on the page, press play, then click ahead to around the 11 minute mark and the interview will begin.

Tune in to Beats1 to hear Zane Lowe’s live interview with Jack Johnson, where the singer-songwriter will also be premiering some new tunes. Go here to listen.

All three of Beats 1’s cornerstone DJs—Zane Lowe, Julie Adenuga, and Ebro Darden—broadcast live at 12PM, 3PM, and 6PM ET, respectively. But if you miss their shows, don’t panic: Beats 1 will replay their programming twelve hours later for the other half of the world, at 12AM, 3AM, and 6AM ET.

Johnson will release his seventh studio album, All The Light Above It Too, on September 8th through Brushfire Records. The album was recorded over the past year at Jack’s Mango Tree Studio in Hawaii. For the first time in years, Johnson handled most of the instrumentation himself, echoing the four-track recordings that launched his career over 17 years ago.

Previous: VIDEO: Beck Releases Official Video for “Up All Night” – Lyrics – LISTEN!
Next: Listen to New Song “The Scheme” by Primus