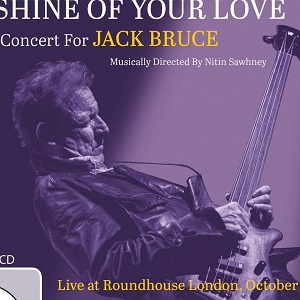 Jack Bruce (Official): The family of Jack Bruce are thrilled to announce that on the 5th anniversary of Jack’s passing, October 25th 2019, the film of the Roundhouse tribute concert that took place one year after his death, will be released as a special DVD & double CD package! The emotional event, musically directed by Nitin Sawhney, features an incredible lineup including Ginger Baker RIP, Ian Anderson, Mark King, Joss Stone, Vernon Reid, Phil Manzanera, Hugh Cornwell, Uli Jon Roth, Bernie Marsden and many more. The package will also include a previously unreleased tribute from Eric Clapton. The event raised over £35,000 for East Anglia’s Children’s Hospices – EACH and proceeds from this release will also be donated to the same charity Jack supported during his lifetime.

Sunshine of Your Love – Concert for Jack Bruce – Live @ the Roundhouse