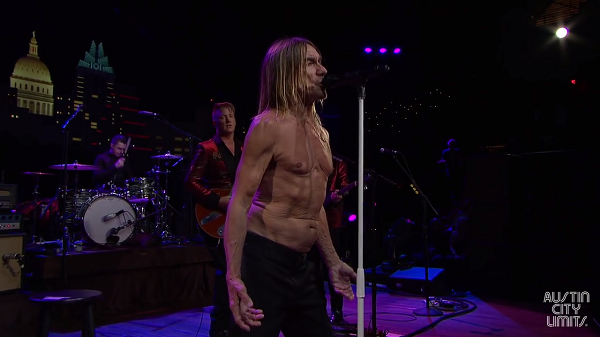 Iggy Pop’s version of “China Girl,” a hit he co-wrote with David Bowie, can be viewed below. The clip is taken from Iggy’s episode of Austin City Limits, which airs this weekend on PBS. A thrilling hour with rock & roll legend Iggy Pop in his first-ever ACL appearance. The Detroit native blasts through classics and cuts from his latest album, Post Pop Depression, accompanied by members of Queens of the Stone Age and Arctic Monkeys. Check your local listings for broadcast times.

About Austin City Limits
ACL offers viewers unparalleled access to featured acts in an intimate setting that provides a platform for artists to deliver inspired, memorable, full-length performances. The program is taped live before a concert audience from The Moody Theater in downtown Austin. ACL is the longest-running music series in American television history and remains the only TV series to ever be awarded the National Medal of Arts. Since its inception, the groundbreaking music series has become an institution that’s helped secure Austin’s reputation as the Live Music Capital of the World. The historic KLRU Studio 6A, home to 36 years of ACL concerts, has been designated an official Rock & Roll Hall of Fame Landmark. In 2011, ACL moved to the new venue ACL Live at The Moody Theater in downtown Austin. ACL received a rare institutional Peabody Award for excellence and outstanding achievement in 2012.