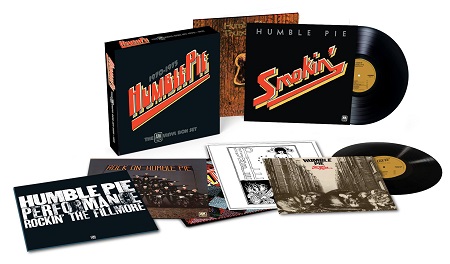 Each album has been remastered and appears on heavyweight 180-gram black vinyl with replica artwork, including original die-cut sleeves and inserts.

Jerry Shirley commented, ” At last we have the extreme privilege, thanks to the hard work of the restoration engineers at Universal, to hear all of our catalogue from A&M in it’s finest form, on vinyl. “Eat It” in particular, had sound problems originally that have now been eradicated once and for all, so that all our fans, old and new, can hear it as it was intended to be, a wonderful slice of Humble Pie Rock & Roll ”

Peter Frampton added, “I’m so glad that we finally have this fantastic boxset, on vinyl no less, of Humble Pie’s great body of work. Jerry and I have worked together with A&M for some time to get this released. We pay tribute to our two lost brothers, Steve and Greg and hope you enjoy this as much as we did putting it all together.”