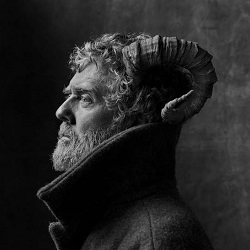 Daniel Johnston, the eccentric singer-songwriter, has died following a heart attack. He was 58 years old. Most of his work consisted of cassettes recorded alone in his home, and beloved by Kurt Cobain, Tom Waits, Flaming Lips, Death Cab for Cutie, Bright Eyes, and Beck. pic.twitter.com/T8f1EnrSNx

I highly recommend scrolling through the Instagram feed of his former manager, Jeff Tartakov, which is filled with Johnston’s letters (like this one), and his fantastic artwork: https://t.co/q7fLqL8xCw pic.twitter.com/DdLJJ8Z7uC

If you’re unfamiliar with Daniel Johnston and interested in learning more, I highly recommend THE DEVIL AND DANIEL JOHNSTON, a highly moving doc that’s available to rent on Amazon Prime. You definitely won’t regret it. pic.twitter.com/85Klz3cj8C

Jesus, RIP Daniel Johnston, one of the single greatest and most fragile musicians to ever grace this planet. X ??

So sad to hear of the death of the great Daniel Johnston. Here is a beautiful performance of his which makes me cry every time. Swell season + Daniel Johnston – Life in vain – HD-ACL – with lyrics https://t.co/ELElWjpZ3P via @YouTube @Glen_Hansard @TheSwellSeason

So sad to hear this news. Daniel Johnston performed on Austin City Limits with The Swell Season in 2009. We're pulling that clip and hope to share it soon. Condolences to all of his friends, family and fans. ❤️ https://t.co/TaXH9w6t3g

Previous: Duff McKagan, “On 9/11, my brother Tim Medvetz was in a hospital bed” The Heroes Project
Next: Devendra Banhart on Nic Harcourt 88.5 FM 2019