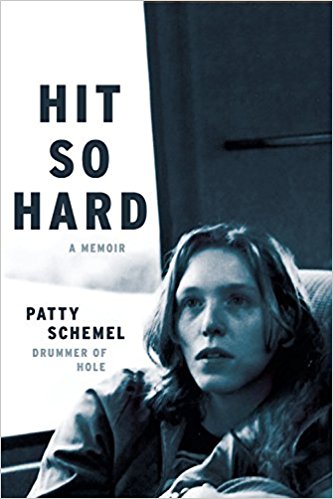 Hit So Hard
A Memoir by Patty Schemel

A stunningly candid and inspiring memoir of recovery from addiction and the ’90s, by Hole drummer Patty Schemel.” 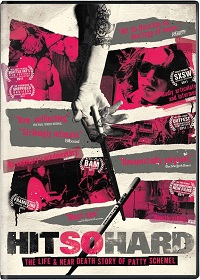 Patty Schemel, the hard hitting drummer of Courtney Love s seminal rock band Hole, is not only a master of the sticks, but a true survivor. After growing up as an outsider near Seattle she shot to stardom in the early 90s and was engulfed by the music scene. Patty casually documented her life as a rock star at band practice, on the road, backstage and in front of millions of people. She experienced rare, precious moments behind the scenes with Hole and Kurt Cobain and the intense highs and lows of these dynamic relationships often shaped by an addiction that consumed her and almost killed her.

About the Memoir:
Hit So Hard begins with stories from a childhood informed by the AA meetings Schemel’s parents hosted in the family living room. Their divorce triggered her rebellious adolescence and first forays into drinking at age 11, which coincided with her passion for punk rock and playing drums. Her efforts to come to terms with her sexuality further drove her memorably hard playing, and by the late ’80s Schemel was performing regularly in well-regarded bands in Tacoma, Seattle, and Olympia. She met Kurt Cobain at a Melvins show, pre-Nirvana, and less than five years later she would be living with him and his wife, Hole front-woman Courtney Love, at the height of his fame and on the cusp of hers. As Hole’s new drummer, Schemel contributed memorable, driving drum parts to hits like “Beautiful Son,” “Violet,” “Doll Parts,” and “Miss World.” But the band was plagued by tragedy and addiction, and by the time Hole went on tour in support of their ironically titled and critically acclaimed album Live Through This in 1994, both Cobain and Hole bassist Kristen Pfaff were dead at age 27.

With surprising candor and wit, Schemel intimately documents the events surrounding her exit from the band in 1998 that lead to her dramatic descent into a life of homelessness and crime on the streets of Los Angeles and the difficult but rewarding path to sobriety after over twenty serious attempts to get clean. Hit So Hard chronicles the extraordinary coming of age of a musician and an addict during the last great era of rock ‘n’ roll excess.

Previous: Ohana Fest Tickets – Jack Johnson’s New Album $4, Recap
Next: Beck, “I have been working on this record for many years” – Listen to “Dreams”