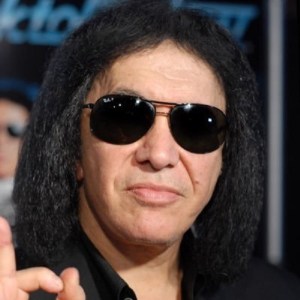 Rolling Stone recently conducted an interview with KISS co-founder Gene Simmons. An excerpt from the interview can be found below. You can read the entire interview @ this location.

So what brought Kiss back to Las Vegas for another residency?

What kind of production will the residency have? Is it scaled-down or is it on par with the touring show?

The answer is yes to both, because when we play stadiums around the world, those shows are like Transformers. You can make them as big as you want. Kiss’s shows have been talked about for longer than you’ve been alive. Anything that’s got a roof on it, we have to scale back the pyro or we’ll blow the roof off, literally. But we are planning lots of surprises for Vegas, which nobody’s seen yet. We’re in the middle of putting that together.

Before the pandemic halted the tour, David Lee Roth was opening for Kiss. Now it’s the performance painter Garibaldi. So David is not back?

Not. But it bears noting that during Dave’s heyday, nobody did what he did. He was the ultimate frontman. Not Plant, not Rod Stewart, nobody. He took being a frontman way beyond anything. And then, I don’t know what happened to him… something. And you get modern-day Dave. I prefer to remember Elvis Presley in his prime. Sneering lips, back in Memphis, you know, doing all that. I don’t want to think of bloated naked Elvis on the bathroom floor.

You’ve talked in the past of one day replacing the members of Kiss, including yourself, and having the band carry on. It seems that a Las Vegas showroom would be ideal for that.

You’re pretty smart, you’re pretty smart…. We are the four most recognized faces on earth. I know to nonbelievers out there it sounds a bit like self-aggrandizement, but I offer the following: we know that Sweden is a monarchy, which means there’s a king and often a queen. But you and I, despite the fact that we’re well-read, have no idea what their names are or what they look like. Which is curious because everybody in Sweden knows what Kiss looks like.

So Vegas could be the type of place where Kiss starts that transition?

Already talking about it… The idea would be more than just music. Like most stage productions, there’s a story. So the Kiss show would certainly include a book, a story, a script.

And the band’s story and music can continue to be told and performed.

Simultaneously around the world.

For Gene to say he prefers to remember “Elvis in his prime” when explaining why @DavidLeeRoth is no longer on tour with @kiss is stunning. How many rock fans would say they prefer to remember Kiss in ‘75?! You couldn’t make it up .. incredible

Excuse the typo… I know how to spell Van Halen. I had to walk out of the last Kiss show I went to in 2019. Pauls voice was worse than nails on a chalk board. Everyone is getting old. Good for Gene for being a senior citizen in good shape but he’s missing a sensitivity chip.

Considering KISS in 2021 isn't exactly delivering everything from the stage, ahem, "live," isn't it a bit over the top to suggest Dave can't pull it off live anymore, so that's why he's off tour? https://t.co/DipvdSvPrv