On January 27th, Krokus released a brand new collection of cover songs, called Big Rocks. The album pays tribute to bands and artists like Led Zeppelin, Queen, The Who, Steppenwolf, Neil Young, Bob Dylan and The Rolling Stones. Krokus provides a fresh new take on classic tracks such as “My Generation”, “Tie Your Mother Down”, “Whole Lotta Love”, “Quinn The Eskimo”, “Jumpin’ Jack Flash”, “Born To Be Wild” and others. “It is a homage, a nod to all those artists who paved the way for us, making it possible for us to do what we do,” says bass player Chris von Rohr. Big Rocks offers a total of 14 tracks: 13 cover songs and a re-recorded version of KROKUS’ hit “Backseat Rock N’ Roll”.

The first single released pays tribute to the folk-rock classic “The House Of The Rising Sun”. “The first time I came across this song was in the wild sixties. I was lying on my bed and all of a sudden I heard the voices of a thousand angels sing,” von Rohr continued

N.I.B.
Tie Your Mother Down
My Generation
Wild Thing
The House of the Rising Sun
Rockin’ in the Free World
Gimme Some Lovin’
Whole Lotta Love
Summertime Blues
Born to be Wild
Quinn the Eskimo
Jumpin’ Jack Flash
Backseat Rock’n’Roll

“At the end of the show the two co-headliners jammed as “grand finale” to a combined crowd of more than 13,000 rocking fans….

“If you did not get your tickets in time for these shows, you still can see the two bands this coming Sunday, March 12th at Salle Metropole in Lausanne [Saturday show already SOLD OUT as well]” 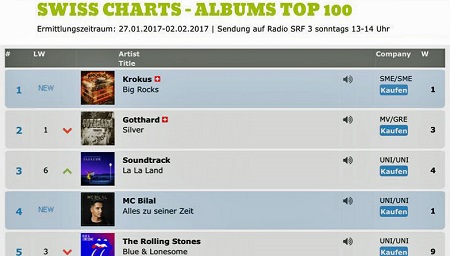 “The great thing about ‘Big Rocks’ is that the sound is full-on vintage power rock with a touch of blues and without any of the usual studio trickery of today. The band sounds raw and flawless and will be a trip down memory lane for lovers of the rock ‘n’ roll classics.” – Metal Wani

“Krokus can’t help but make all of these songs heavier and grittier. The songs are still recognizable, but a few have been beefed up and given a bit of a heavy metal makeover.” -Metal Misfit

“Big Rocks is one of the best cover albums I have heard.” 9/10 -Markus’ Heavy Music Blog