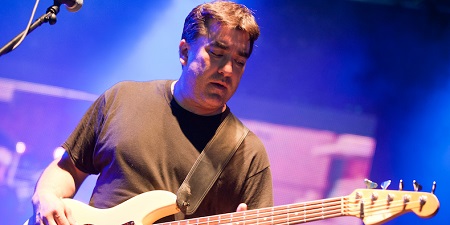 Kevin Garcia, a founding member for the American indie rock band Grandaddy, has died today (May 2, 2017) after suffering a “massive stroke”. Garcia was admitted to the hospital on Monday due to a “catastrophic” head injury.  At this time, no further details surrounding his death were given.  The bass player was 41 years old.

There are no accurate words to express what we need to.
We are absolutely shattered to say that we lost our friend and band mate Kevin Garcia early this afternoon. He succumbed to the effects of a massive stroke.
We were all able to say goodbye to him and he was surrounded by his closest friends and family here in Modesto.
Kevin started playing with Grandaddy when he was fifteen. He was an actual angel. He navigated life with a grace, a generosity and a kindness that was utterly unique. And contagious. He is loved so deeply by so many.
Kevin was a proud father of two children, Jayden and Gavin. He is survived by his grandmother Joan, his parents Randy and Barbara (who let us practice at their house until 2001…and who are the best), his brothers Craig and Jeff and his wife Sondra.
We’ll have more to say in the days ahead. Right now the four of us are grieving together. With great sadness and love, Grandaddy”

To help with his family’s coming expenses please visit their GoFundMe page at this location.

Grandaddy was formed in Modesto, CA in 1992 by Jason Lytle, Aaron Burtch, Tim Dryden, Jim Fairchild and Kevin Garcia. The band’s initial success came with their 1997 album Under the Western Freeway after generating some buzz with the single “Summer Here Kids.”

In 2006, the band broke up just prior to the release of their fourth studio album, Just Like the Fambly Cat. Reflecting on that time, vocalist Jason Lytle commented, “I was unhealthy, I was unhappy, I was overwhelmed with the travel. All of the demands and stuff. I’m just not really suited to that kind of living. At that time I’d relocated out to Montana, and I’d become very happy and accustomed to my new pace of life.”

March 03, 2017 – Grandaddy releases Last Place, their first album in more than a decade.