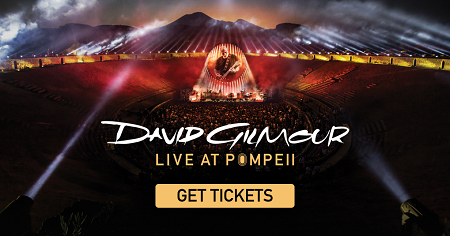 David Gilmour was interviewed before last night’s gala screening of Live at Pompeii, ahead of the film’s showing in cinemas worldwide next week (Sept 13th). The complete interview has been embedded below.

David Gilmour Live At Pompeii will be in cinemas worldwide on September 13th and will released as a live album on September 29th.

We chatted to David at last night’s gala screening of #LiveAtPompeii, ahead of the film’s showing in cinemas worldwide next week (Sept 13). pic.twitter.com/xsz8MtpvN7

For one night only on September 13, 2017, over 2,000 cinemas worldwide will be showing David Gilmour Live At Pompeii.

The concert performance film, David Gilmour Live At Pompeii, will be distributed to cinemas worldwide on Wednesday September 13th and will include highlights from both shows, filmed in 4K by director Gavin Elder, and will be presented in Dolby Atmos sound.

Tickets are now on sale worldwide with more cinemas to follow soon, including Latin America and Central America. Via ‘Demand It’, if David Gilmour Live at Pompeii is not screening in a specific area, fans can make a request for it by filling out a form on the website, and Trafalgar Releasing will do their best to bring the event to a cinema near them.

Previous: Dave Matthews Band to Host ‘A Concert for Charlottesville’ w/ Cage the Elephant
Next: WATCH Prophets of Rage on The Tonight Show Starring Jimmy Fallon