Dave Mustaine recently spoke with radio.com about this year’s Megadeth Boot Camp. According to the official website, Megadeth Boot Camp is a once-in-a-lifetime experience for the ultimate Droogie (bottom). The epic weekend will take place on Dave Mustaine’s private estate in San Diego. Think of it as the summer camp of your metal dreams!

Megadeth workshops will range from:

Fireside stories from the road with the band
Intimate acoustic performance from Megadeth
Jam session and live streaming of Symphony of Destruction
Drum, guitar and bass lessons, tips and tricks
Wine tastings excursion with Dave
Even metal trivia to challenge the depths of your music appreciation

“The boot camp thing was pretty fun to hear about, it wasn’t something that we’d thought about doing. Our management had been involved with the guys from 30 Seconds to Mars, and they told us about this “boot camp” that they had, and it was really fun for their fans, and it was really cost effective for them because it wasn’t done on the cheap. I want everything that we do to always be a great experience. I don’t want the sleeves to rip off on our t-shirts.

“I’ve got a house in southern California, it’s an estate, it’s on ten acres, there’s a river that runs behind it and there’s a salt water pool, our vineyard is there, there’s a studio, a stable, a bunch of pastures and shit like that. So I thought, how about we do our boot camp here? People can camp out in those fancy heavy duty tents, and for the people who don’t want to do that, they can rent a room at one of the hotels right down the street. So far, there are about 100 people that are going for it. We were gonna cap it at 100-150, most definitely we would not go past the 200 mark. We’re gonna be filming it, there’s going to be clinics teaching people how to play instruments, and learn about songwriting.

“We have the original studio recordings of “Symphony of Destruction,” and everybody can sign up for an additional event where they go into the studio for a half hour and sing the lyrics to “Symphony” and then we mix down their own version with them singing.

“On the last day, we’ll all sit together around the campfire and we’ll all play “Symphony” with 150 people strumming acoustic guitars together, which I think will be super awesome. Not a “kumbaya” kind of moment, but I think it’ll be cool!” 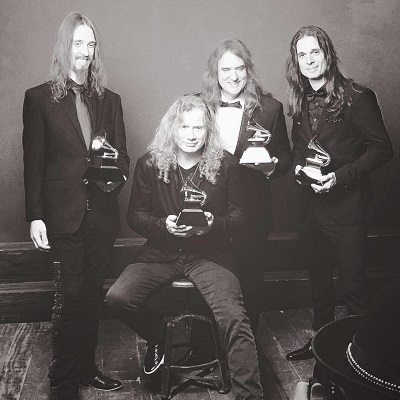 Mustaine was asked about his thoughts on the house band performing a Metallica song post-announcement.  As Megadeth walked to the stage to accept their Grammy award, “Master of Puppets” can be heard playing in the background.

“You know what? I didn’t even notice it. It just sounded like some music in the background. The funny thing is that when I went back and listened to my acceptance speech, and I heard the song, I was like, “Wow!”

“Everyone was asking me, “What about the Metallica thing?” And I said, “I didn’t hear it, I just saw it.”

“So I went back and listened to my acceptance speech and I went, “Wow!” I didn’t mind them playing it at all, it’s a house band, and they’re doing cover songs. They were probably saying, “We don’t know any Megadeth songs, how about if we do a Metallica song?”

But when I went back and listened to it, I was like, “Oh my God, that’s the worst version of ‘Master of Puppets’ I’ve ever heard in my life!”“

FYI, A Droogie is a derivative of Droog and means friend, taken from the movie “A Clockwork Orange.” If you are a member of the Megadeth Forums or a fan of Megadeth in general, Dave considers you a Droogie.