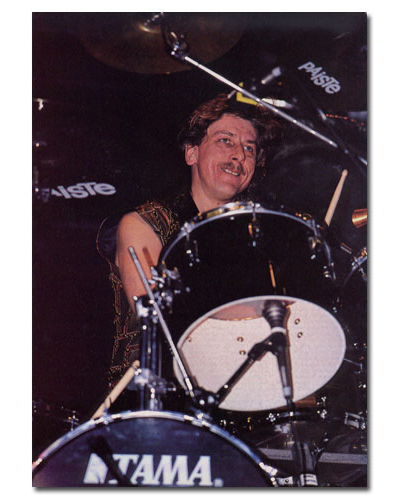 According to a Spanish newspaper, former Judas Priest and Trapeze drummer Dave Holland reportedly passed away on December 16th.  He was 69 years old.  At the time of his death, Holland had reportedly been residing in Fonsagrada, a town in the province of Lugo in northwest Spain. No further details about the cause of death have been provided.

Holland played with Trapeze from 1969 to 1979 and then played on some of Judas Priest’s most classic albums from 1979-1989, including British Steel, Screaming for Vengeance and Defenders of the Faith.

K.K. Downing:  “It is with deep regret that I have to accept the sudden and unexpected news that Dave Holland has passed away. Dave was a solid friend in life and solid musician both on the stage and in the studio; I will cherish the many gigs we played together and the albums that we made and I will always be grateful to the indelible contribution that Dave gave to Judas Priest.  My sincere condolences to all of Dave’s loved ones, family and friends and to all of the fans that so much appreciated Dave’s musical ability and his life’s work. R.I.P. Dave.”

Juan Croucier: “RIP Dave Holland of Judas Priest. He made some great records with that band.”

In 2006,  the drummer was accused of attempted rape, indecent assault, and child endangerment against a 17-year old male with learning disabilities to whom Holland was giving drum lessons. He was later sentenced to eight years in prison and was eventually released in 2012.  Holland steadfastly maintained his innocence.

About the conviction, Holland had said: “I was convicted of a crime that I didn’t commit and like so many others in similar situations to the one in which I find myself, an offense that never even existed in the first place.

“There is absolutely no difference whatsoever between the criteria that is permitted to be applied in sex offences now and that which was applied in cases of witchcraft in the 17th century.”