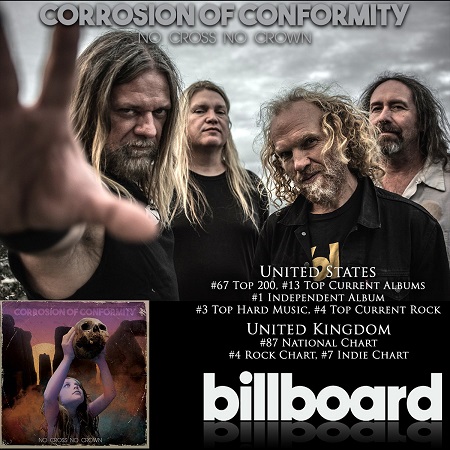 The latest chart positions for Corrosion of Conformity’s brand new album, No Cross No Crown, have been revealed. Their latest effort was released on January 12th via Nuclear Blast Entertainment and debuted at #67 in the United States on the Billboard Top 200. The band also landed at #12 on Billboard’s Top Current Albums, and #3 on the Top Hard Music Albums chart, making it the highest charting album of the group’s career.  In the United Kingdom, the album debuted at #87 on the Official Charts.

“To all the free thinkers and beer drinkers, we couldn’t do this without you,” the band said in a statement. “Thanks so much for your undying support and loyalty all these years. Up the hammers! See you on the horizon. Love and respect – CORROSION OF CONFORMITY.”

The official video for their new song, “The Luddite,” has been embedded below.

Recorded in North Carolina with Grammy-nominated producer John Custer, the band cut the album in about forty days over the course of a year. “We took our time and didn’t put any pressure on ourselves,” says frontman/guitarist Pepper Keenan. “I’d go up from New Orleans and we’d do four or five days at a time, just hacking away at it. It was fun because we did it like a demo, but in a studio. We were writing and putting it on tape at the same time. We took what parts we thought were great from the old days and weren’t scared to go backwards. It kinda wrote itself that way.”

The band is currently on tour with Zakk Wylde’s Black Label Society.  A list of dates and ticket info can be found on our previous post at this location.