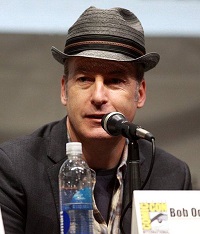 Mr. Bob Odenkirk:  I don’t usually tweet my own interviews but if you’re a BCS fan, I am happy with this one.

I don’t usually tweet my own interviews but if you’re a BCS fan, I am happy with this one. https://t.co/INajU9HQGn via @Deadline

What first impressions did Season 4’s scripts leave you with?

Bob Odenkirk:  The most interesting thing was how Jimmy deals with the death of his brother Chuck, who is the most important person in his life. His whole life is geared for trying to win his brother’s affection and respect. That’s what he’s done with his 30s, and it means everything to him. So when his brother commits suicide, and he thinks back on the interaction they had—which anyone would do their last interaction—and the last thing Chuck said to him was, “You didn’t mean that much to me. You never meant that much to me,” I think inside, some switch goes off, and all that pain and all the loss he feels is just immediately buried under a big, “F*ck you. I’m not going to feel bad about you, for you, anymore, ever again.”

And, of course, it’s a lie. Jimmy is broken in such a way because of Chuck’s choice that he’ll end up being Saul pretty much full-time, I think, in his life. And that’s really only a part of who he is, the scammy guy who’s just a dealmaker. That’s just a small part of who he is, but he ends up putting all of his chips in that stack and going all in on being Saul because he’s just angry, and he doesn’t want to think about who he really was—Jimmy McGill, a good guy who wanted to do right for a long time and wanted to be respectable, do something good with his weird talents.

How did you understand the way in which Jimmy processed the news of his brother’s death? The relationship between the two had always been complicated, to say the least.

Bob:  You know, Jimmy’s reaction to Chuck’s death may not even be considered unhealthy, and I don’t think it’s that rare. It’s a full and complete compartmentalization of all those feelings, of all the loss that he could feel if he thought about it. It’s a mechanism of self-preservation, to just push all that away and decide that Chuck’s passing is almost an incidental fact and nothing more, and it’s time to go on and chase the next best thing you can find.

There are things that Jimmy does that are strange—leaps in his psyche that aren’t easy to put together in a mathematical way, when you’re breaking the script down—but I think we all have that in us. You could call it inspiration, or you could call it a lizard brain moment. But that’s one of those moments…especially when Howard Hamlin comes to his apartment and expresses the feeling that he, Howard, had been the cause of Chuck’s suicide, because he wouldn’t let Chuck back into the law firm. There is a choice there. I could tell him, “You’re wrong. We all had something to do with it, and it was Chuck’s choice in the end.” Or he could share his own feelings of being a part of that, or he could do what he does, which is make a leap inside himself over that chasm of grief, and say, “F*ck you. Yeah, sure, it was your fault—fine. It wasn’t mine. I had nothing to do with it. Go ahead and feel bad.”

Those are weird moments, and they’re strange choices, but I don’t think they’re entirely impossible, or rare even. I mean, someone can die—someone close to you, who you love—and you can feel like, “I should be sadder.” And conversely, someone you don’t know can die, and you can start to weep [laugh]. And you’re like, “I didn’t even know him, but it affects me so much.”

When Bill Hicks died, that changed how I was thinking about my life, and I’d only said hello to Bill backstage at a talk show. I’d never actually talked to him; we just both said, “Hi,” we both knew each other’s work, and that was the end of it. But when he passed away, I made choices in my life that were different than everything I’d done before.

You’re shooting Season 5 of Better Call Saul right now. What can you tell us about it?

Bob:  It’s the best season we’ve ever done, it’s going to blow your mind, and I’m not kidding about either of those things. It’s f*cking awesome. I can’t wait for people to see it. It’s just shattering in every direction, and I love it.