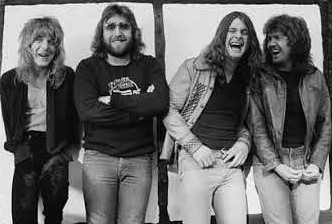 Rolling Stone recently conducted an interview with legendary bassist Bob Daisley. An excerpt from the interview can be found below. You can read the entire interview @ this location.

They let you go from the band right after recording Diary of a Madman. What happened?

During that tour in 1980, when we just had the first album out, Ozzy and Sharon kept pulling me aside and saying, “Let’s get rid of Lee. Let’s get Tommy Aldridge in the band.” And I’d never agree. It wasn’t because of any sort of blind loyalty to Lee or anything. I just thought the band was working so well. Why fix something that wasn’t broken? I couldn’t agree to something I thought was wrong. I said, “Sorry, I can’t agree.”

They asked me several times and I would never agree. And then even Tommy Aldridge turned up to one of the shows, which I thought was a bit distasteful. Lee didn’t know. But then we went into Ridge Farm in February of 1981 and began Diary. As soon as that was finished, I phoned my mum. I said, “We’ve just about finished the album.” She said, “What’s going to happen then?” I said, “We’re probably going to America next week and then go on the road to promote both albums.” She said, “Well, you won’t.” I said, “What do you mean?” She said, “You might think you are, but you’re not. And neither will the drummer.”

She didn’t even know Lee. She just knew. I actually said to her, “This time, mom, you’re wrong. There’s no time. That’s it.”

I think we did a couple more days at Ridge Farm, finished recording, and then a couple days later I got the phone call from Sharon. “It’s over.” I still remember her words.

She didn’t explain why?

No. I think they wanted to get rid of Lee. They wanted to get Tommy Aldridge in the band. The only way to do that would be to get rid of me as well, and then ask me back, which did happen. About six weeks later, I got the phone call from Sharon. I had a meeting with her and the accountant and she said, “Whether you come back in the band is one thing, but we want you to write for and play on the next album.”

That was Bark at the Moon, which was meant to be with Randy, Tommy Aldridge, me, Ozzy, and probably Don Airey. But then in early 1982, when it was all planned we’d do the album that year, Randy was killed in a plane crash on the 19th of March. That was all put back. And then they got Jake E. Lee. That’s when we did the Bark at the Moon album.

You were infamously not credited for your playing on Diary of a Madman; the album listed Rudy Sarzo as the bassist. How did you feel when you looked at Diary and saw Rudy’s name there and not your own?

Lee and I were in the studio with Uriah Heep. We put them back together. They became defunct for several months or a year. Lee phoned Mick Box and was like, “Let’s put Uriah Heep back together. Bob is interested.” We got John Sinclair on keyboards and Peter Goalby on vocals. We had another good band. We were in the studio and we went into the office and somebody had a copy of the Diary of the Madman record. When we opened up, we just freaked. They had taken everything away from us. They credited Tommy Aldridge and Rudy Sarzo on the album we played on. They didn’t even play a note on it.

They also took our production credits off it. Max Norman at Ridge Farm was the house engineer. He was a good engineer. We got on great with him. He engineered the first album. You’ll notice on the first album, he’s credited just as “engineer” and it says it was produced by us. That’s what we wanted. By the second album, he was house engineer at Ridge Farm when we went back to record Diary. It was actually my suggestion: “Let’s give Max a production credit since he’s become part of us.”

That was agreed. But when the album came out, Lee and I didn’t get credit for playing on it. We had our songwriting credits, that was all good. That was still on there. But it says, “Produced by Max Norman, Ozzy Osbourne, and Randy Rhoads.” And so we got left off production as well. And I put some good ideas into those songs for production. I didn’t mind Max having a production credit, but I would have liked one myself.

Regarding ‘No More Tears’ – I think it’s no coincidence that that’s the last great Ozzy record and it’s your last record with him.

[Laughs] You’re not the only one to say that. That’s been said over and over and over. But I wouldn’t put it down to just me being on it. I think there was a rapport between Ozzy and me. We had a thing that worked with the writing, the vibes, the energies. It worked so well.

That’s why when the band was first together with Lee and Randy and me, it was just a magic energy and a magic chemistry. That’s why I didn’t want to disturb that by getting rid of Lee, which is why I’d never agree to that. While I was recording No More Tears, I was in the control room with Ozzy. That’s where I would record, sitting on a chair next to him and the producer. Ozzy actually said to me, “You know, you were right about Lee.”

I was like, “Oh, God.” This is about 12 years later. But I didn’t say any more about it. I just bit my tongue. I thought, “This is pointless now.” I didn’t want to say, “Why the fuck couldn’t you see that back then? Why didn’t you listen to me?” But that was water under the bridge and I didn’t want to take it any further, so I let it go.

I’ll spare you and everyone the details of the lawsuits you filed against Ozzy for unpaid royalties. People can read about that in your book. But how did it feel to learn that they’d re-recorded your parts on the first two Ozzy records?

To be honest with you, I thought it was pathetic. Someone sent me a copy of one of them, and I laughed. I thought, “Is this a joke?” I just didn’t think it was done right. The thing is, you can’t reheat a soufflé. You can’t take the ingredients out of a cake and then try and bake it again. It happened once. We did various takes of each song and we used the parts where each of us shined the best. There might be five takes of “Crazy Train” or four takes of something else, or eight takes of something else, and we picked the one that had the best vibe. And it was four people being recorded in a room together. You can’t change that.

And the fans hated them for it. It was like, “God, you’ve got no respect for the fans and everyone that spends money on this music.” They were hated for it. I’m just quoting what fans said, not me.

There’s A LOT MORE to go. You can read the entire interview @ this location.