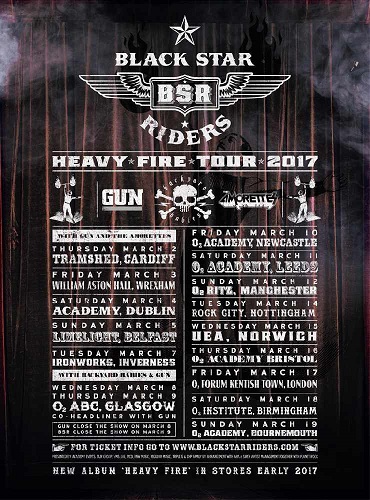 Ricky Warwick, Scott Gorham, Damon Johnson, Robert Crane and Jimmy DeGrasso will play a total of 16 shows in the UK and Ireland.

Vocalist Ricky Warwick
“It seems like ages since we did the Leppard / Whitesnake tour so we are all really looking forward to be back out on the road with Black Star Riders.

“Our third album will be out just prior to the dates so its going to be great to play tracks from that along with favorites from the first two records also. Having my old friends from Backyard Babies, Gun and The Amorettes out with us too is just icing on the cake to make a great tour!”

Scott Gorham
“It’s great to be back with Nick Raskulinecz (Foo Fighters, Rush, Alice In Chains), after such a great job on The Killer Instinct it was a no brainer to continue the relationship and this album is going to blow everyone away.”